I did not know what type of game Smoke and Sacrifice is. Judging by the art style, some sort of indie RPG?

No. It’s a survival game. And it is dark. Imagine my surprise. The game begins as you, Sachi have to collect your newborn son. He is asleep in your hut, and on collection have to take him to the temple. Fair enough I figure. Then you sacrifice him… what!?

It turns out there is a ritual where firstborn children are sacrificed to save the village, protecting it against monsters. I was quite shocked by this – the art style does not immediately lend itself towards such a dark theme. As I continued, years later of game time I discovered the village is attacked by monstrous creatures, and you (as Sachi) with the aid of a mysterious fellow teleport yourself with the sacrificial machine to a nether world on the rumour that your child may still be alive…

It then becomes survival time, and if you’ve played a survival game before then a lot of this will feel familiar. Smash things, collect things, craft things. You are taught quickly on how to craft a lantern which keeps the smoke away from you. Post lantern creation, you are left alone for a bit. I found this a bit unclear what to do, as the first enemies I met, destroyed me. 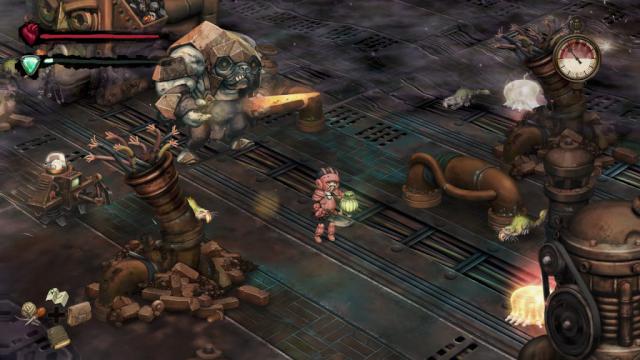 This leads quickly to combat. It’s simple. It’s not quite button mashing, but more button timing. Push a button, do an attack. Push another, do a dodge. You can craft weapons for more damage, and that’s it really. It works, but does feel slightly tiresome. A few mechanics do mix things up a bit; traps to enable you to attack enemies in a different way, and the ability to milk your enemies (!!!) to regain health.

I mentioned crafting earlier and there are a lot of things to craft. Thankfully, it is made very easy for you to craft things. A menu shows a list of things which you know how to craft (you do have to find/learn recipes), and how many materials you need to craft them. One thing I did find troubling though was that it is not clear where you need to find some of these materials. Early on for a basic recipe you need bone. Could I find any bones? No. I killed and got into many fights, but still no bones. Eventually I did stumble across some, but it didn’t feel clear or consistent.

Crafted equipment changes appearance which is nice as well as affording you access to new areas. However, the main point here is exploration with the story drip feeding information to you through NPC dialogue at a fairly sedentary pace. The story which underpins the game is a nice change of pace from some of the more open world survival games, but it is very bleak and some of the wandering about won’t be for everyone.