I really like the Pandemic games; working to wipe out diseases or prevent Cthulhu from showing up and causing mayhem (not in the same game, in case you were wondering) is an exciting and challenging concept, but the feeling when you win and save the day is a pretty spectacular buzz. So what happens when you get rid of the ideas of most of the previous ideas about curing diseases, send yourself back into the days of ancient Rome and try to prevent bad guys from attacking your shiny city? Well, you get Pandemic: Fall of Rome of course.

The general layout of the game is the same, with several areas joined together by roads or water routes, but the whole backstory is different which brings about a whole new theme with it. In this game, the Roman Empire is starting to crumble. Excessive expansion has left defences thin on the ground and Anglo-Saxons, Vandals and other bad guys have rocked up planning on attacking your borders and gaining access to Rome. These enemy cubes replace the disease cubes in previous games, but serve a similar purpose, moving across the board in a slow march towards Rome. You can stop them of course, but to do so will take planning, care and a small slice of luck along the way.

Instead of curing a disease, you’ll now be trying to form allegiances with the invaders in order to vastly reduce the chance of them screwing you over and messing up your nice city. Ally with all five of the tribes before your empire fails and you’ll win. If that doesn’t sound violent enough for you don’t worry, you can also win by wiping all of the bad guys off the map if that’s more your angle, although in our games that seemed to be the more challenging option.

So how it’s played then; each turn is pretty straightforward, giving you a structured way to go about your business. First up is carrying out four actions with the most obvious being to simply move around the board, and while there are various ways to move around (along a path, on a boat, taking some of the baddie-busting legions with you…) there isn’t a huge amount to worry about here. You can fortify your current location by discarding a matching card and placing a fort meeple down onto the space. This has a couple of effects including giving some support if you get attacked there, so can be a handy option if you’re trying to either stem the flow of enemies or hoping to regroup and recruit some more legions from your reserves (which, incidentally, is another of your action choices). 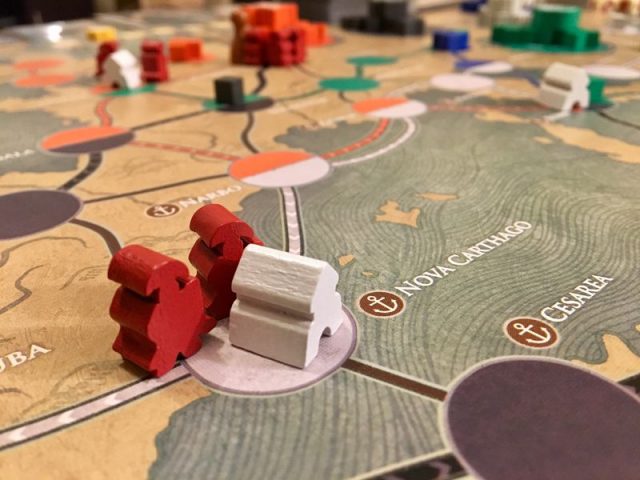 But where some of the luck element comes in is the battle option. If you’ve got some legions on your space along with some of the opposing forces, you can roll some dice and see what kind of damage you can do to the bad guys. These dice will signify whether you can use your character’s special ability, or if you need to remove some of your own fighters or those of the enemy. If you’re going the diplomatic route and have the right collection of cards you can also form an alliance with an opposing group, essentially taking you 20% closer to having won the game. The enemies still attack, and still could contribute to you losing the game, but you’re closer to having formed alliances with all of them and therefore winning the game. The last option is to pass on the card matching your location to another character, which is really handy for building up whole sets to form an alliance, but does involve bunching your resources and characters together, which leaves large areas of the board pretty much open for invasion.

So, as you can see, a fair number of possible actions.

Once that’s done you set up the city invasions, which give you an opposing faction and a city to aim for. The position of the enemy cube depends on the route that each faction takes from their starting point, and essentially sets up a march towards the given location that grows each time you draw a card from that group. Depending on where other cubes are at that time you might end up strengthening their presence in the target city, or adding a cube nearby on the route. Either way after each turn the number of cubes, and therefore bad guys on the board is going to increase quickly, and as they might also be wiping out some of your legions if they’re not protected it’s a potentially devastating moment at the end of each turn.

All of this adds up to several ways you can lose the game. Whenever you end up with a 4th cube on a city, that city is “sacked”, essentially another word for being taken over, smashed up a bit and generally ripped apart until house prices are unlikely to recover any time soon. Once that happens to Rome (which Wikipedia tells me has happened a considerably number of times over the years) it’s game over. But it’s not just Rome you need to look out for; each time another city is sacked your Decline track advances one, showing the crumbling of your empire. Once it reaches the bottom, even if Rome is still standing, it’s the end. There are a couple of other conditions to lose by as well, which are not being able to add more barbarians when you need to, or not having enough player cards to draw after your turn, but they’re pretty rubbish reasons to lose. Destroyed cities is where the excitement is at.

So, another Pandemic game without disease. Does that even make it a Pandemic game? Well, the base game is clearly apparent here. The way the cubes “overflow” if a city gets taken over with fortifications involved, creating a potential chain reaction into nearby cities has Pandemic written all over it, and the way the turns are structured has an air of familiarity about it as well. But this isn’t just another Pandemic game. There are enough new things here to make it a whole new game in its own right, and as such it becomes easy to recommend to newcomers to the series and Pandemic fans alike. It’s a decent challenge too; you won’t win every game by any means, but winning is absolutely possible, and the route to either outcome is a really good fun series of teamwork moments, mistakes and breakthroughs which will have you wanting to try “just once more” in order to get the result you want. If you’re looking for something for you and a couple of mates to fill some evenings, this could be just the game you’re after.