PSVR is starting to really pick up steam now, with some fantastic and enjoyable games being released that really push the limits of the hardware available. But others go for another approach, going slightly less crazy on the visual content while still giving a unique and mesmerising experience. Ghost Giant sits squarely in the latter of these two camps, dropping the full 360° view in favour of something closer to 180°, giving you plenty of freedom to explore but letting you do it without having to turn, twist or contort your body too much in the process.

In Ghost Giant you take the role as a giant ghost, funnily enough. You stumble upon Louis, a kitten who’s happily minding his own business when you rock up and scare the living daylights out of him. Before long you start to earn his trust and help him get around various locations in the hope he can make it back to his poorly mum, while trying to help out, chat to or escape from the various other characters that you meet along the way. One thing immediately obvious from the start, and something that carries on all the way through, is just how incredibly beautiful and charming this game is. You hear about games having charm quite a bit, but this is something else. From the upset Louis who you cheer up with a wave and a fist bump, to the small diorama type towns and locations that let you rotate buildings, pull flowers out of the ground and fling hidden basketballs into hidden hoops, everything just makes you smile. There are even hidden glow-worms in most levels that you can hunt around for between helping out Louis with his latest problem.

The visuals and sound design of the entire game is spectacular too. Streams trickle gently behind you, characters continue with their own conversations, or happily get on with their own lives even as you grab levers to spin their house round, pull the roof off and fling it into the distance. Conversations between Louis and other character are pretty heart-rending too, as he tries to avoid conversations about why he’s not with his mum or how he’s got a huge ghost helping that only he can see. Sometimes he’s desperate to impress people, or make himself feel liked. You can see it in his body language, and hear it in his voice. Even a tiny character like this has been made in such a way that you really start to feel for him and want to do whatever you can to help, and the way you help is pretty inspired too. 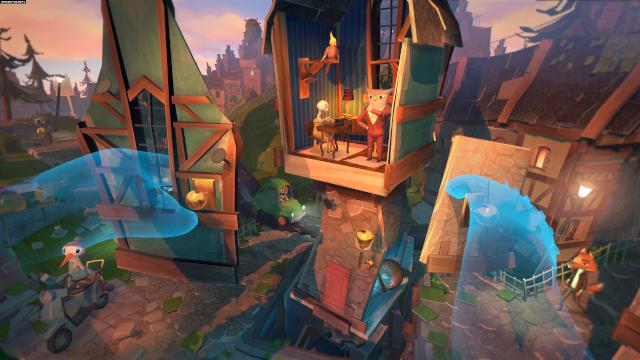 Grabbing a Move controller in each hand, you’ve got a couple of things you can do. A push of the Move button points your finger, and a pull of the trigger lets you close your hand and grab something. Just between those two motions you can totally transform the landscape around you; rustling a tree to scare a bird, picking up a wheel to fix a broken car, or throwing something at a piece of innocuous looking scenery to knock it over and give Louis access to a new location. But you can also interact with little Louis himself, carrying out the secret handshake he teaches you early on, giving him a little tickle or a quick first bump. Puzzles revolve around this movement too, with a really cool moment early on when you’re trying to impress some artists before being able to move on, but to do it requires you to find the various colours by using a leaking motorbike, or squashing up fruit for example. It’s very cool.

You can also use a couple of buttons on the Moves to rotate the scenery round a chunk at a time. This is a game designed to be played sat in one position with minimal need for rotating yourself round, and while you can always look around you it’s often easier to give a quick press of the circle button to spin things round and save the issue of you getting in the way of the camera seeing the Move controllers. The controls work well, and apart from a couple of tracking problems (which were probably more to do with my position in the room than anything) everything felt natural and easy enough. Well, apart from the basketball shots. They were a source of much frustration…

Clocking in at about 4 or 5 hours this isn’t the longest game you’ll find, but you can pad that out by really exploring the game’s 13 areas, looking for those little hidden extras, watching and seeing things that have no bearing on the story but are just fascinating to see, and stopping every so often just to move things around for no real reason other than just because you can. It’s an amazing, emotional journey and one that anyone who owns both a PSVR and a soul should really be looking at picking up.