For a company as enormous and all-encompassing as Google, their initial dips into the mobile phone market have been relatively low key. The Pixel phones have found an audience, one which will probably stick around with the brand for quite some time, but for most (me included up until now) they’ve gone under the radar, eclipsed by the Samsungs, Sonys and LGs of the phone world. But that wonky radar is doing the industry a huge disfavour. Having spent some time with the Pixel 3, I can genuinely say it eclipses any device I’ve used before, including the iPhone and Galaxy series.

Why that’s the case is something almost impossible to sum up quickly. Whether it’s the build quality, the hidden power within, the wonderfully vanilla version of Android or the camera (my God, the camera…) it’s a great phone to look at, to hold, and to use, with more than enough unique features to make it stand out against the crowd. I’ve had numerous compliments while using it (a concept which still puzzles me, but I’ll take it) and if you’re looking for a nod towards the design team being on point, quite a few have mistaken it for an iPhone. Whether or not you like iPhones, it’s hard to argue with the fact they look premium, so that confusion in its own right is worthy of mention.

Some of the smaller features are ones you’ll get to use more often than you’d ever imagine. Waking up the Google Assistant can be done using the usual voice command, but for added awesomeness you can squeeze the phone and she’ll wake up ready for whatever you need. It sounds like a gimmick, and I wasn’t sure how much I’d use it, but I’ve surprised myself, especially when needing a quick timer, calculation or reminder setting. While holding your phone the ability to just give it a little squeeze for instant Assistant is surprisingly effective.

Elsewhere there’s the Now Playing option, which tells you what music is playing within hearing distance. I know what you’re thinking: that’s what Shazam has done for a few weeks more than forever. True, but this happens on your lock screen, automatically, without needing an Internet connection. That’s right, it’s done entirely offline, on the device itself, and I’ve no idea how the wizardry works. But work it does, and if you want a reminder of what music you’ve been surrounded by recently you can just dip into the settings, see the list and easily launch YouTube or Spotify to listen to the song. It’s a very, very cool feature. 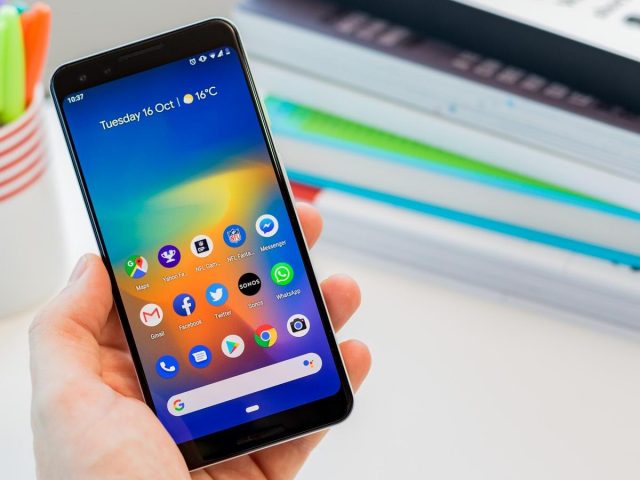 But for times when you just want all the noise to stop, when you’re in a meeting, reading a book or going to sleep, why put your phone on silent? Just turn it face down, and the “Flip to Ssshhh” feature kicks in and silences all but the most vital of notifications. A gentle vibrate is enough to tell you it’s enabled, so you don’t have that awkward dilemma of having to turn it face up again to see if it’s worked, only to realise that automatically turned everything back on again.

Gesture controls are a big deal on the Pixel 3, with the bar at the bottom of the screen letting you swipe up to see the open apps, and left and right to automatically flick across between anything you’ve got open. Longer, slower swipes allow you to flick through multiple apps at once as well, and while it takes a little while to get the hand of it all, you’ll soon be dancing around your phone with little more than a few flicks of your thumb. It’s a wonderfully intuitive system, and one which I imagine will be copied by other manufacturers before too long.

As for running apps and games, this is a very quick phone, comfortably quick enough to run anything you throw at it. You’re sure to find other phones with slightly better specs, but there’s a point when phone hardware starts to outstrip what they actually need to do, and the Pixel sits on the right side of that line. I’ve used recent iPhones, Samsung Galaxys and various other top end devices, and the Pixel matches all of them for everything I tried to do. It’s a very impressive feat.

Not, however, as impressive as the camera. There’s a long standing rivalry between phone companies to get the best camera on their phones, but Google have thrown down a mighty gauntlet with this effort. Between the black magic night mode, which manages to take incredible photos in impossibly low light, and the portrait mode that utilises an amazing combination of hardware and software to give SLR-style depth of field to pictures, you’re never far from a professional looking photo. We’re still not at SLR levels, but we’re getting much closer.

So from having no knowledge at all about Google’s phones, I’ve become a massive fan. As you can tell from the review you’ve just read (unless you’ve gone for the TL;DR option of this final summary) there are so many fantastic features that you’re unlikely to find elsewhere, and the power available under the bonnet is more than enough to fit your needs. If you’re in the hunt for a phone that won’t set you back a crazy amount but still feels like a bang up to date device, this could be your phone. It’s time to start realising that your iPhone might not be your best option any more!