Valfaris is an 80s action movie of a side-scrolling shooter. It’s also not hugely dissimilar from the old 8 and 16-bit shooters in terms of looks and influence. Fortunately, it’s also rather good fun.

Bold and brash, bright colours and a garish universe await and greet you immediately. Therion – an armour-clad killing machine crashes his ship onto an alien planet. Not just any planet, however, this is Therion’s homeward (Valfaris), long gone but reappears in orbit. Now covered in alien lifeforms, Therion is chasing down a mystery of what has happened (including some shenanigans from his own father) and solves this mystery with lots and lots of violence.

Melee action and gunplay are Therion’s tools of choice to deal out all kinds of justice. All the guns have got cool names which represent Therion’s approach to life (my favourite is the Envoy of Destruction). There’s a benefit to mixing your drinks here, with two guns and a melee weapon mapped to the face buttons so you can try different strategies easily enough to thwart the oncoming hoard. However, managing all of this along with jumping felt like it required more dexterity than I was able to muster on a few occasions (particularly on some of the end of level bosses).

Mitigating some of the challenges of just smashing all of the buttons together comes a shield. It can deflect oncoming attacks but I kept hitting it expecting a roll as in Dead Cells (which due to the pixelated nature has more than a passing similarity to). Once I got the hang of it I was fine though, but there are some crippling difficulty spikes. 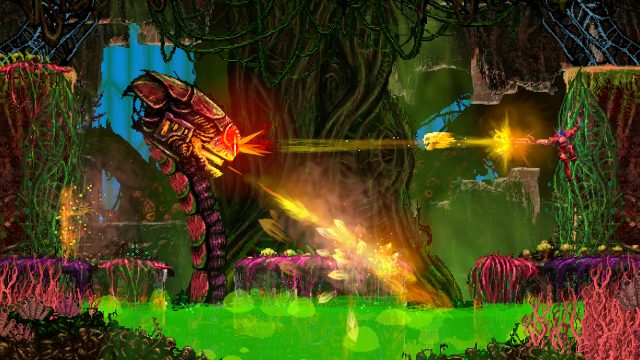 At times I ran through waves of baddies like they were going out of business, at others, I would struggle and have to repeatedly respawn. Resurrection points are offered by way of collecting tokens. The more tokens you save (without activating respawn points) you get more health. It’s a risk-reward system which is cool, although I favoured having the respawn points as I was never entirely sure what was coming next.

It’s a balls-to-the-wall action game really, and it does it well. Sometimes it’s a little too eager to thrust you into the action though, with a heavy metal soundtrack blasting, explosions all over the place and enemies spawning at a rate of knots. Sometimes too quickly, it feels a bit like Valfaris has one gear and is just currently accelerating, but like a runner who sprints a bit too fast, there are occasional stumbles with this approach.

For what is developed by a very small team, Valfaris is a fun game. It’s a decent side-scroller that invokes an 80s metal vibe and is completely unapologetic about it. There’s strong competition out there (like the aforementioned Dead Cells) but it’s still worth a look.