If there’s one way to get a racing game obsessive to get excited, it’s by telling them there’s a new version of GRID coming out. Having waited a looong time for this to happen, and playing the various DiRT and F1 games in recent years with that slight “wouldn’t it be nice…” feeling in the back of my mind, the fact I’ve now spent a couple of weeks buried in the racing chaos of the new GRID game has a very cathartic feel to it. And while it’s fair to say the route to the racing isn’t as great as you might have hoped, the racing itself more than makes up for it.

So let’s focus on that most important aspect, the on-track action. The original GRID was known for its bumper-to-bumper action and fierce rivalries during races, and the new version is every bit as exciting as it was before. Each driver has their own personality, meaning some will be more aggressive towards you, some will be quicker than others, and some will make better teammates. But all that can go out of the window if you’re going to rough someone up a bit during a race. Too much adverse attention and you’ll start to develop rivals, giving them extra incentive to hunt you down and cause you extra grief where possible. They might aggressively block you when you try to overtake, or brake a little later and use you to slow down before a sharp corner, punting you into the wall. It works too, and I found myself going out of my way to avoid those I’d annoyed, or being far more considered when overtaking them to make sure they had no opportunity to try and get me back. In a way it starts to reflect how people would react when playing online, and while the AI is still clearly AI it gives the drivers a more human feel.

The handling is great too, and while it takes some time to get used to and work out how to stop drifting round every corner, once you get to grips with it (pardon the pun) the cars feel great, hitting a fine line between power and grip. Hooking up a wheel makes a huge difference to and is by far the best way to play the game, giving a fantastic sense of control and speed, but the controller is perfectly useable, you might just want to tweak some of the sensitivity settings to suit your style. But if, like me, you start off wondering whether or not they’ve got the handling right, just give it time. You’ll soon realise that it’s spot on.

You can also enjoy all of this however you want. As is becoming customary for a Codies racing game you can set up your own individual events using whichever tracks and vehicles you want, so if you want to head to your favourite street circuit in some single seaters then you can do that straight away. But the main meat is in the career mode, or at least what’s being called a career mode. Here you can work your way through a range of different disciplines such as touring cars or GT racing, in whichever order you want to. You can blitz each category one by one if you prefer, or mix and match until you’ve hit the end of four of them, at which point you’ll head to the GRID World Series, where things really get ramped up. The problem here is that there’s not much by way of narrative in the career. While in F1 and older GRID games you’ve got a team which you build up with clear progression and suchlike, there isn’t really much to cling on to this time round. You just keep competing in events until you hit the main championship, but it feels a bit empty, more just serving as a tool to deliver the racing in a more structured way. It’s a bit of a shame, but given I tend to end up skipping large amounts of career dialogue I didn’t miss it too much… it’s just nice to know it’s there, so by the same token it’s a little disappointing to find that it isn’t. 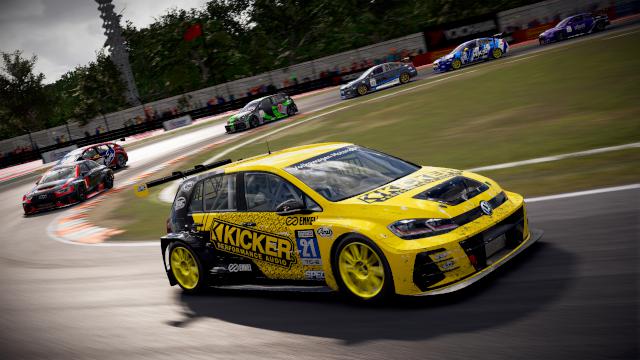 Online events work well, with Codemasters setting up community events to get online and race against others at organised times. Races fill up with human and AI players, and the challenge is absolutely great, as drivers combat each other on track and try desperately to avoid cars spinning and crashing across the road ahead of them. It reminds me of some great evenings I spent playing GRID on the PS3 with a group of friends, and as you’d usually see in a Codemasters game the online performance is very respectable. I only had one race which contained a laggy driver, and as they didn’t last much beyond the first corner (in my defence I didn’t know he was about to lag right in front of me on that corner…) it wasn’t a big issue for long.

I’m looking forward to some DLC hopefully injecting a few more tracks and locations, and I’m definitely wondering if something more resembling an interactive career might be patched in at a later date, but what’s here so far is extremely good fun. The livery editor is back with colours, styles and sponsors ready to be tinkered with and unlocked too, so there’s every chance to waste hours picking your perfect combination of style and colours, just in time to jump online and have half the paint ripped off by the first corner anyway, so it’d be great to see further customisation options made available later on as well.

But let’s be clear about this: despite the shortcomings of the career mode, this is a very very good racing game. It’s a bit like the Pro Evo of racing games – less flashy around the menus and options than its competitors, but certainly knows what it’s doing when it matters and willing to take the fight to any other racer you’ll throw at it. I’ve loved my time with GRID so far, and if you’re looking for something that sits comfortably between arcade and full sim racer and will stop you from blinking for a few minutes at a time while you wrestle a super-powerful racer round a track, all while trying not to be shoved into the gravel by someone you pissed off on the previous lap, this is for you.