Everyone loves a “best of” compilation. Even DJ extraordinaire Alan Partridge decided his favourite Beatles album was “The Best of the Beatles”, and so it should come as good news that Need for Speed Heat serves to bring as many of the good bits from the last 25 years of Need for Speed games, and bundles them all up into one shiny new package which sits proudly as its own game. Right?

Well, I know what you’re thinking. Those kinds of introductions normally go before a “well sadly…” paragraph. But this time, things are a little different. Pretty much everything in NFS Heat feels good. The actual driving is especially enjoyable, letting you rip through the fictional city without worrying too much about hitting something that’ll stop your car dead in its tracks. Sure, while smashing through a tree or ploughing through a wall without much of a dent in your speed might not feel like it’s steeped in realism, it means you can really enjoy the pace of NFS, and will come in extra handy when you start trying to get your car sideways round a corner.

Drifting is handled in a very unusual, but surprisingly effective way. Instead of hammering on the brake briefly to get your back end to kick out, a quick lift and reapplication of the accelerator does the job for you. It takes some getting used to, and you might find yourself hitting buildings and missing your turns for a little while, but once you get to grips with it the system actually works really well, giving you the chance to fling yourself round a course while keeping your speed at an appropriate level to get the attention of any nearby police cars.

Oh yeah, there’s police. Your racing is split between day and night, and lets you pick which time of day you want to go out every time you leave your garage. The main difference is what you earn from each time of day, with daytime races being more organised affairs that let you earn some money from the races. But the respect and admiration comes from racing at night, which gives you a more intense racing experience as a direct result of the aforementioned law enforcement knocking around. Your heat level steadily increased as you race round the city at night, acting as a multiplier for your earnings and letting you rack up some seriously hefty totals. The trouble is as your heat level increases, so does the amount of interest the police start showing in you. And these police cars are brutal; they show serious aggression trying to get you off the road and an almost impossible turn of speed to keep up with you, and yet trying to turf them off the road to give yourself some breathing room is incredibly tough, especially early on when your cars aren’t quite as robust or quick. But get back to your safe house without being wrecked by a cop, and you’ll bank everything you’ve done that night, and can rest in the knowledge you’ve outraced the police for another night. 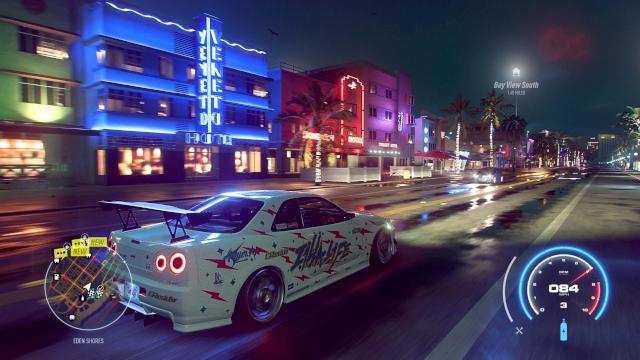 All the while this is going on, you’re portrayed as a new racer trying to make it big. It’s a bit of a cliche and isn’t going to win any awards for the originality of the story, but fits the purpose of why you need to race across both day and night and start to earn money and reputation to upgrade and purchase your vehicles. As you stick new bits onto your cars the way they behave changes, as you might expect them to. But with this being closer to an arcade racer than anything sim-based, the upgrade reaction is easy to understand. A simple two-axis graph shows you where your car currently sits on a scale between racing and drift, and whether it leans more towards road-based driving or off-road. It’s a very nice system, and lets you tweak your car to suit how you want it to behave, something very handy when you start getting a bit more grunt in the engine.

While the racing is cool enough, there are loads of other things to be doing around the city as well. You’ll find billboards to smash, speed cameras to trigger at the fastest possible speeds, and various painted murals which let you unlock matching paintjobs for your cars. It’s incredibly easy to lose a couple of hours to this just flicking between racing and generally titting about by finding things to do. There were times when having to drive for a couple of minutes between races got a little tiring, an issue I also didn’t overly enjoy in The Crew, but that’s possibly just my impatience. It’s no different to most other open world racers.

Essentially the main gripes I have with Need for Speed Heat are the story, which doesn’t really add up to much, and the fact it can take a little while in the earlier parts of the game for things to wake up and really get going in terms of the cars you can jump into and the feeling of speed that you’re no doubt expecting for a game with this title. But this is, without a doubt, one of the better Need for Speed games in recent times, and if you’ve been holding out hope that one day a NFS game would come along that deserves to show off one of the most famous racing series names in gaming history, then this is pretty much it. Pretty easy to recommend.