“Well that’s a cute little racing game”, I thought to myself when I saw Mini Motor Racing X being promoted. What I didn’t expect was also a very good racing game.

I also didn’t expect such a large amount of game. To begin with, you get two major options with how to play Mini Motor Racing X. The first is pure racing. You get a number of boosts (of which you can also collect more as you see them on the track) and have to finish as high as possible. The other is a weapon-fest, whereby each lap you will collect things akin to the classic Mario Kart archive. Missiles, traps to drop, spanners (aka green shells) all feature and add chaos to the proceedings.

Annoyingly, after I’d done quite a lot of races in the standard racing mode (there are 36 races in the Beginner cup alone!), trying the X weapons mode meant none of that progress transferred. I get there are reasons why, but it adds a lot of repetition to the game which had the effect of me just not bothering to play that mode. Which was a shame as it’s pretty fun.

Focusing on the racing then fortunately isn’t a terrible experience. The cars handle nicely, although I discovered you don’t really need the brake. It was at this point I had to check if it was an RC car game – the top-down cutesy look suggests it might be, bu the environments you race in are nicely decorated and suggest not. There’s a weird dichotomy here. The environments are decent too, from race tracks to haunted towns, to the docks. They’re detailed and sit well as little areas to race around.

A cool touch which helps handle some repetition is that it rotates the overhead angle each time you play it in a different challenge in the cups. It can feel like a different track at times – this is so long as you have the overhead view. You can race in bonnet cam or a number of third-person views, which is nice for this sort of game but it clearly isn’t designed for third-person and as such the car doesn’t move too well in this view (it’s a hard one to explain but if you’ve tried a number of racing games in chase cam, you’ll be aware that some work and some don’t).

For those that have VR, Mini Motor Racing X has a VR mode. This lets you play (as far as I can tell from videos) from an above view of the play set track, electing a steering wheel or RC remote (answering my questions about whether it’s an RC game!) with floating hands over the track. This is really cool. 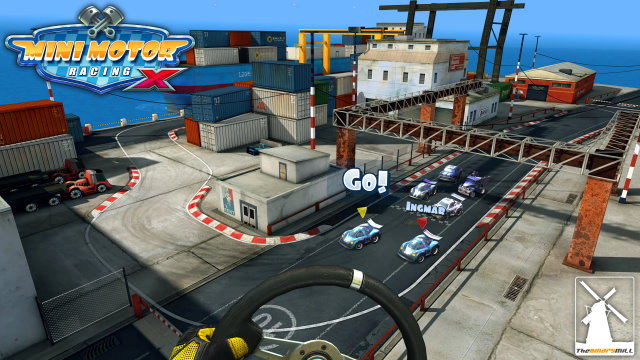 It speaks wonders to the fidelity of the game that it looks so good, that it’s hard to tell if it’s supposed to be a real life environment or not. It explains the handling too – the slidey but slightly weighty feel. It’s really a joy to play. The difficulty however means it isn’t always fair.

It’s not that it’s too hard but more that as you race, you earn money. That money is spent on either new cars or upgrades. I found that I would be struggling on races, apply some upgrades, then be comfortably winning until I wasn’t again, when it was upgrade time. And so it continued, which is a bit of a shame as it never felt that I was racing competitively, just that I had either a worse or better car.

Sadly, it’s the same online. There weren’t many players when I tried but I did get a couple of games, and it seems like if you have a lot of upgrades then you have a much better chance, so probably isn’t much of a point playing online until you have spent some time in single player. Races (and laps) are very short so it won’t take too long, but you will need to do a fair bit before you have a decent amount of upgrades.

There’s quite a lot of game here, although a lot of it is through repetition of tracks with increasing numbers of laps. The alternative viewpoints sometimes make them feel like different tracks, which is nice but I think it’s best played in short bursts. I did spend some time with X mode as I started to get a bit bored, and joyfully found out that it does contain some different tracks and isn’t simply the same as the standard racing mode but with weapons. This is a good thing and effectively doubles up on content. There’s also a co-op career mode for playing with friends (sadly offline), online multiplayer, online friends games with mixing VR and non (if you have a VR set and your friends don’t, then you can still play cross-mode) and a Rocket League style bumper ball game. It isn’t Rocket League but it’s a nice addition and attempt to flesh out the game with more content.

There’s a lot to like here in a tidy little package. I can’t play it in long stints – Gran Turismo it is not, but it’s a lot of fun, and I’d recommend it.