An open-world shark RPG. I just need to reflect on those words I’ve written.

You’re a baby shark, and throughout the game, you’ll grow by levelling-up into a bigger shark. Your nemesis – the star of a nature show about hunting sharks – is out to get you, and whilst a narrator gives some background of how sharks behave, I chose to prove them all wrong by attacking everything and anything I could. Sharks eh.

The game begins with you learning how to control a shark. The narrator tells you a bit about sharks – it’s a documentary after all, and you are introduced to the shark hunter who the show (Maneater) follows. The narrator is voiced by Chris Parnell (who plays Jerry in Rick and Morty) and spouts made up and ridiculous facts as you go about your business of eating everything. It’s actually pretty funny and a nice touch.

It feels a bit like an open-world Ubisoft game from the start. You have the intro and you’re basically told to explore the world, levelling up as you go by eating things and doing various tasks (usually finding and collecting things, or eating special things). The map is lit up with various missions and markers to go to, but it never feels too overwhelming.

Getting about lets you flex your fins as a shark should. Controls are a fairly simple point and go, but you can go near the surface to get your fin sticking out and scare people. There’s a boost which allows you to jump out of the water, which is helpful in attacking boats but also collecting things on land. At the expense of your health, you can flip and flop onto land to get things, which I wasn’t hugely keen on as it feels like a bit of a cop-out. Do sharks belly flop across the land to get to another body of water? Maybe. I’m not an expert.

Combat too is pretty simple. You push R2 to attack, and that’s about it. You can do a tail flip to smack things and stun them, and combining these together gives you the opportunity to send them flying. Enemies have a level which you can compare to your own in order to give you an idea as to whether or not you’re likely to have too much trouble. 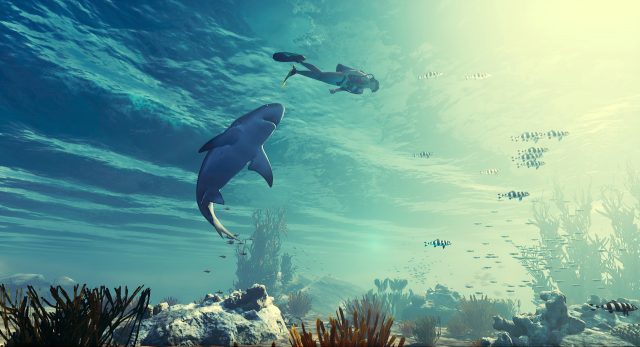 It’s very much an “eat, eat, repeat” motto for Maneater. You’ll be constantly and feverishly pushing the R2 trigger to crunch everything in site and quite quickly you’ve seen all of the mechanics the game has to over. There are skill trees as you level up, but combat went into a flinging of the stick to face the right way (combined with a lock on) and a right trigger mashing until something died.

It is quite fun though, but it’s also gruesome. This is a bit of a shame in that if there was a setting to tone down the gore a bit it would probably have a pretty good younger audience, but it’s probably a bit bloody. The story-line is weird too, there’s a shark hunter who is terribly mean, but at the same time, you are going around and eating every person you can. I wasn’t really sure who to root for, I guess you’re a sort of bad-guy-good-guy ala GTA.

One thing that is truly gruesome however is the frame rate. It frequently drops a lot of frames playing on a PS Pro that it may make you feel a bit sea-sick. It looks nice enough and the world is reasonably sized but this is a bit of a shame as the feel of skimming through water, fin out is really cool. Suddenly you’ll encounter a swarm of fish, crocodiles or people, the frame rate will stutter as a million health bars come on the screen and it loses a little bit of majesty.

I wish they lent into the comedy a bit more in a way. I was hoping maybe for some fishing related incidents, more Jaws references, maybe the 3D shark bit from Back of the Future. Maybe even the song from Nelly Furtado (who was a friend’s favourite song back in Uni), or an appearance by Anthony Jeselnik (google Shark Party – trust me).

“Eat, eat, repeat”. I feel like they should have put this on the box as it sums it up nicely. It’s not a bad game, it’s a fun time. It is, however, a bit shallow, you might suggest they needed a bigger boat.