The idea of building your own vehicle out of a range of bits, letting you drive, race, fly, sail or any combination of them sounds great to me. With a Lego-obsessed son, having a pile of parts and the freedom to build whatever you want, a flying submarine, a boat-car, a rocket bike, whatever else… it’s the ideal scenario, isn’t it? Trailmakers lets you do exactly that in a range of ways, and while there are frustrations and question marks over some areas of the game, it’s definitely lives up to its promise.

There are a few different ways to play, but chances are you’ll want to start with the campaign which teaches you the ropes and brings new parts and ideas into play slowly and gently. Kicking off with a small car with a bar at the front to push things around, you’ll be on the hunt for glowing balls that you need to push around and get back to a drone-type thing that processes the balls and turns them into new parts for you. Before too long the balls get a bit more difficult to push around, and keep skewing off to the side, or are too heavy to push around. At this point you need to get your problem solving hat on and think about what you can do. Initially I added a couple more blocks to the front of my car, giving me a U-shaped claw that let me push things around without them scooting off to the side. But I needed more power, so strapped another engine into the back. Hey presto, more power! But with great power comes great breakability, as Uncle Ben nearly said. Suddenly I had to slow down to start pushing things, otherwise the bigger impact just shattered my car into numerous pieces.

Later, I had trouble getting up steep cliffs to the higher areas and the parts they were keeping away from me, so I went back to the drawing board and made a 6-wheeled vehicle with two engines and some carefully positioned ballast to stop my flying backwards off the cliff face. Hey presto, one beefy hill-climbing beast that could climb up all but the most vertical of cliff edges. It’s all about adapting to your requirements, you might need to add a sticky-up bit to poke a part off a high rock, or create a small, light, fast vehicle to jump a large gap to an isolated area. And you can do all of thee quite easily with the building tools available. Vehicles are made by clipping things together, and while it’s fairly quick there area couple of frustrating elements to it. Getting things lined up can be really tough in the 3D environment, and trying to work with three axes of movement as well as rotating and flipping the parts can be an exercise of patience and frustration at times. Add to that the hinges that should make your wheels turn, which are really tough to work out which way round they should go, and there are times when you wonder if this new amazing vehicle is actually worth the effort.

But persevere and eventually you’ll get to grips with whipping up your inventions in no time. By the time you’ve collected all of the parts on the main island, or at least as many as you can, you’ve got enough parts to make a boat to access areas across the water. Even before you get all the parts, it’s fun to try and make a boat out of your car. I hoped that strapping a propeller onto my buggy would make it a boat-buggy, but it turns out floating and steering are quite important elements in a boat, and after a few seconds of going round in circles gravity took over and I had to swim back to land. Back to the drawing board. 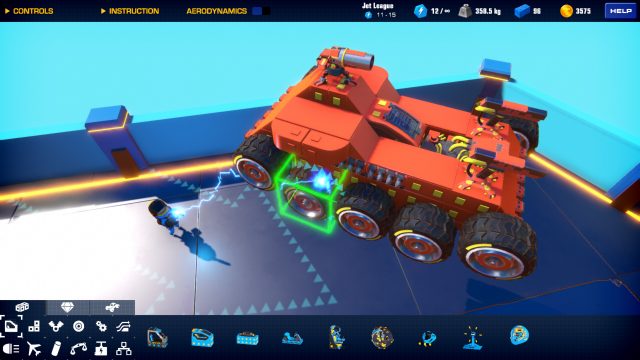 And that’s pretty much how the campaign helps you learn the ropes. You’ll make mistakes by not having the right pieces, but then the game will give you a useful blueprint and give you an idea of how the new vehicle types could be constructed. And when you’re ready, or feeling brave, you head to the sandbox mode to build whatever you like and see what happens. There are racing events available, and plenty to explore as you travel round, adapting your creations to let you reach awkward places or just impress other people that you might play with online. Away from the campaign the focus is very much on experimenting and playing around, a true sandbox really, and while it can be a little daunting to jump in and try and figure out what to do once you know what you’re doing there’s a staggering range of things you can build, from professional looking racing cars to absurd submarines that would normally never get the chance to be anywhere except the deepest, strangest parts of your brain.

So while Trailmakers is far tougher to get started with as you’d expect, and as such would prove tricky for younger kids to get started by themselves, once you learn the ropes it becomes a pretty impressive build-em-up that lets you really flex your imagination and experiment with a few interesting ideas. If you’ve ever wanted to build a vehicle that can both fly and go underwater, this lets you try. Want to recreate those Top Gear moments of making a boat-car? You can do just that, and you can even do it with a couple of friends as well to see who can make the best vehicle in a set amount of time.

If you’ve got imagination, and you’ve got patience, this could be a really great way to spend some time. If you’re lacking in either of those things then it might be a harder thing to get the hang of. Either way, it’s great to have Trailmakers on the PS4, and it’s a game you should definitely give some consideration to.