Liberated is told as a graphic novel, with panels that come to life at certain points which is where you play the game. It’s a cool effect and when I heard about it, I thought back to Comix Zone – one of my favourite games on the Mega Drive. This isn’t that.

Liberated instead is a serious affair about a resistance group fighting against a corrupt government who are invoking policies like something out of 1984. Standing up to a dictatorship led oppressive government seems a bit too close to home in today’s society but I’m not qualified to talk politics. Instead, how does it play?

Well, with some running and hiding initially. Early on the game tells you to avoid certain people, but I found it extremely difficult to work out who I should be avoiding and who I should be fine to leave alone. As a side-scrolling your hiding options are pretty limited, sticking into doorways etc. and I found myself thinking about 2D stealth classic Mark of the Ninja. This isn’t really a stealth game as you get to do some shooting too. Ultimately this is how you could (perhaps harshly) sum up the game – a fairly standard 2D side-scroller with platform and shooting elements.

It does try to do more than that. Utilising the rarely-used comic-book-style narrative it does immediately feel different although I didn’t always appreciate the breaks in the action as I sifted through more panels. As an avid comic book reader (especially over lockdown) my tolerance for comics not really grabbing my interest has worn thin which probably doesn’t really help Liberated. Still, there are some interesting narrative twists which I wasn’t expecting, including changing character perspectives and even deaths! This is a mild spoiler I suppose but I doubt you’d be too invested to be that upset over it. 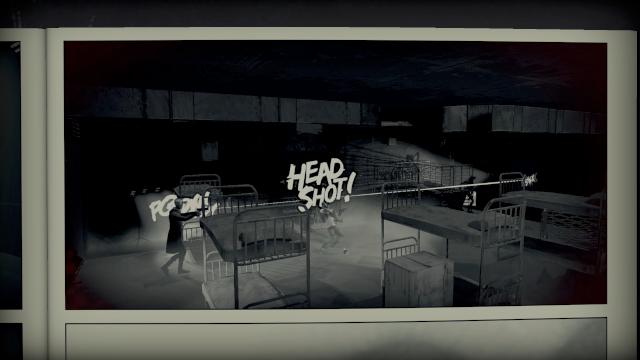 The gameplay is pretty easy and at times I struggled to decide if this is a narrative experience with some gameplay elements or a game with a strong narrative side. Neither work well or hard enough to claim pole position, and I felt sometimes that I’m playing the game just to get to the next story panel and my running across a screen and shooting some dudes a mere inconvenience to deliver the story.

The AI doesn’t help – it’s not the smartest and you’ll breeze through it all fairly quickly. My longest moments of gameplay actually came through replaying stealth sections that resulted into a QTE to kill people and hitting the wrong button (which is a personal issue due to the funky button order on the Switch).

Oddly for a game where platform gameplay is a core component it has some horrible lag. I had to undock my Switch to play in handheld thinking there was some latency issue when I went to jump but sadly no. The best comparison I could give is the weird delayed lumbering in Another World (another game from the Mega Drive era coincidentally).

I think the key selling point here is the comic-book style and narrative. Being all black and white is also really cool and a good attempt to try and differentiate itself from other games. Sadly the filling in the lovely wrapping isn’t quite enough.