I’ve not really properly played any MMO games before. I’ve dabbled in a few but never really got ‘the bug’. I did know though that before even starting Black Desert that I’d be spending the best part of an afternoon creating my character. And that, I did.

So, my creation, Clive, is a samurai. There’s a really great selection of classes and character designs to choose from, and once I kitted him out in some gear (no need to start buck naked thankfully) I spawned into the world and was surrounded by a horde of other players. It was both pretty overwhelming and impressive at the same time, to be instantly greeted by a hive of online activity.

Your first order of business is to go and talk to someone nearby. Off I trot, and holy moly this game is rough. I’ve heard about ‘MMO lankiness’ before – Black Desert is very much a game to be looked at in stills. Not moving, it’s really rather nice. Any sort of motion though and this thing is not great. I guess there are compromises to be made for having so many characters on screen at once in a small area, but it feels skittish and choppy.

There are constant freezes as you’re running around, perhaps punishment for having the world as a large open map than connected areas. Textures take random times to pop in, and sometimes there’s a freeze between all textures loading in. I haven’t seen a game struggled this badly loading textures since first playing PUBG on a console when you’d run around a polygon which is supposed to be a kitted outhouse, only it hasn’t loaded before you’ve finished looting it. The frame rate is probably the biggest culprit, which is all over the place. 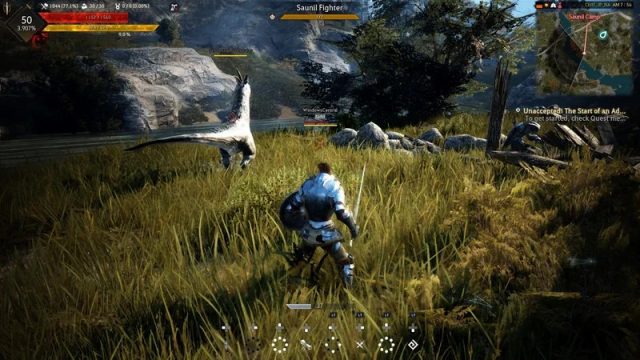 After your first conversation, you’re pretty left up to your own devices which have pros and cons. Pros – no lengthy tutorials, which I personally hate. Cons – I had no clue what to do and had to look at a guide almost immediately. This wasn’t a bad choice, as I learned that the game has a fully featured and fleshed out trading and taxation system, a mini-commerce simulator, house decoration, fishing simulation…. all sorts. What I really wanted to do though was kill things. And as luck would have it, the majority of quests are just this.

Go to place A, kill B. These are most of the quests that I have encountered in Black Desert so far. Light attack, heavy attack, it’s a fairly basic combat system but it’s fluid enough to pass the time. I imagine it may get more interesting at higher levels and in PvP modes – helpfully, you can create a level 60 character to experience some endgame stuff right off the bat, which admittedly I haven’t tried yet but I thought this was a nice addition. You can also party up with friends, which is helpful although I never felt like I really need additional support so consider this a social bonus if you intend to.

Ultimately, the technical failings and samey progression quickly started to make me feel a bit down on Black Desert. I felt like I was doing the same thing over and over, and then it hit me – it’s just a big old grind. Maybe this is what MMOs are, maybe this is what I’ve been missing out on all this time. There’s comfort in a grind, that’s for sure. But there must also surely be better games out there for spending hours grinding with. And that’s probably how I’d summarise Black Desert.