This year’s Call of Duty is a bit of a tough one to review. It’s three distinct components under one roof, spread across two generations of consoles, and one format (across generations) featuring some benefits not on the other. Where to start? Let’s break down the three components.

Before we get to this however it’s worth addressing a fundamental change from last year’s Call of Duty. ‘Black Ops Cold War’ takes the alternative year development away from Infinity Ward, and puts it in the hand of Treyarch, with support from Raven and Sledgehammer games after a well documented troubled development before we even get into the COVID impact. This means that whilst using an enhanced engine, and taking the ‘boots on the ground’ reboot approach that Modern Warfare (the new one, not the original or the remastered original – confused yet?) took, it feels slightly different.

This feeling is best described as a bit less weight in movement despite it also playing pretty fast and smooth. You really feel it when mantling obstacles, but also on smaller tweaks like being able to mount your weapon on walls and ledges, slightly reducing tactical options back towards the more typical Call of Duty style. Is this a big deal? No. But it is highlighted more from the year Black Ops Cold War will have alongside Infinity Ward’s Warzone, a now standalone Call of Duty experience on the Modern Warfare engine.

Phew. TLDR: it feels like Call of Duty but slightly different, and in my view, not quite as ‘comfortable’ as last year’s. Now, let us review!

Set during the early 1980s of the Cold War, a direct sequel to the original Black Ops, you are tasked with pursuing Perseus, a Soviet spy. What follows here is a glamorous attempt, endorsed by a scary-looking Ronald Reagan to restore the balance of power in the favour of the US.

I mean, it’s basically rubbish right but Call of Duty has been more about the set-pieces and it doesn’t disappoint here. The next-gen reveal trailer we saw earlier this year is a very early level, and despite seeing it before, it was spectacular to play. It looks fantastic, runs as smooth as anything and is great fun throughout what is a fairly short experience – around about 5 hours or so. Still, it packs a lot in and even mixes things up. 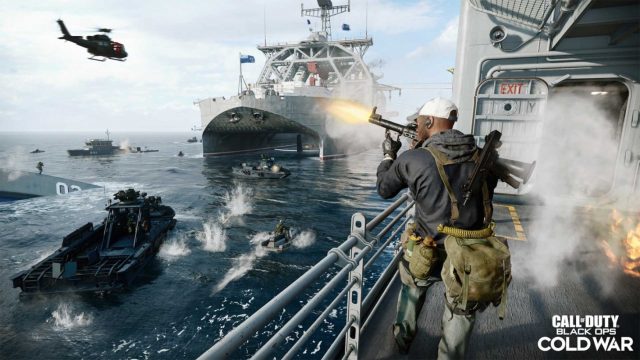 Trying to push the narrative, Cold War experiments with a few new mechanics. For a start, you can name your character and pick a gender (including a friendly, non-binary one). This has next to no bearing on anything really but is a nice touch. I saw on a forum that someone had named their character with their daughter and started to play together. This is a mistake folks, it starts off very, very violent and does not let up.

Stealth sections are also added in here, which I’m not a fan of when forced into typically non-stealth games, but it’s handled well. There are some nice bits too, having to find the character being referred to and take covert pictures. There are also some decision points with can affect the story, and result in different endings, adding to the replayability.

There’s nothing that new here that’s going to blow your mind, but it’s a fun experience and a worthy addition to the Call of Duty campaign archives.

The bread and butter of Call of Duty. After the last Black Ops (Black Ops 4) dropped campaign altogether to focus on just multiplayer, you might be expecting this to perhaps be a bit slighted given the focus also on a single-player experience this time around. And that’s certainly the initial impression – Black Ops Cold War ships with 8 maps, the smallest amount in Call of Duty launches for years. The good news is that future updates will be free, and as of writing, one map has already been added into the mix. But still, 8 maps.

And immediately the community cries. As is always the case, it’s a mixed bag. The Miami map, at night, soaked in 80s neon seems to be regarded as a dud amongst the meta, but I quite enjoy it. One split across a few ships at sea, with zip lines between them (which is one of the maps which scales based on game mode/ number of players) is for my money, terrible as the flow is broken up too badly. At least there is something for everyone here, be it close-quarters action or a snipers paradise. One map, set in the desert amongst some aircraft wreckage delivers the best of both worlds.

What’s lost in maps is made up for in modes. There’s a lot of option here in the standard multiplayer (be it big or smaller team games), from the classics to the ‘new’ classics such as Kill Confirmed – my personal favourite where each player drops a dog tag on death, and this needs to be collected by the opposing team to secure a point, or the home team to save one.

Numerous loadout and customisation options exist to enhance your playstyle. Weapons have various attachments to unlock which you can add to your guns, there are various perks giving different abilities, and you have wildcards which vary from letting you have two of every throwable to being able to use every attachment on a gun at once.

The biggest ‘new thing’ here though is Fireteam mode. Fireteam pits 10 teams of 4 against each other in one of two bigger maps. They have five labelled points, each with a dirty bomb. Killing people drops uranium, which on collecting helps ‘load’ the dirty bomb, and then you have to arm it. Killing, depositing and arming gets you points. On detonation, radiation spreads across the map in an area, harming players, funnelling the action. 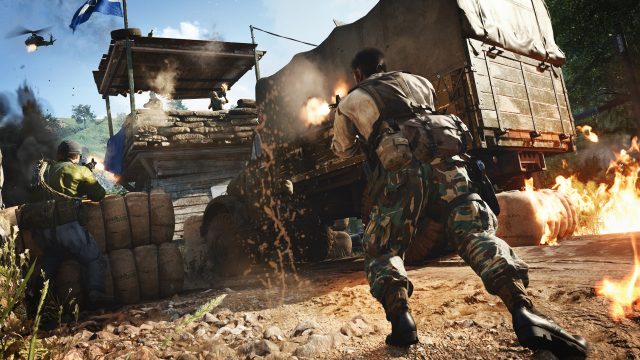 The maps are nicely detailed – one is a forest area and one set in the alpine snowy hills. They’re big, but teamplay is slightly compounded by an inability to launch a map. Still, it’s organised chaos, and it’s great. Sadly some elements seem unbalanced – vehicles on the map are massively overpowered at present. And scorestreaks (earned over time by obtaining points for kills, objectives which remain when you die) replace killstreaks, offer power-ups to everyone ranging from radar to helicopter gunships.

Whilst good, in practice, everyone tends to hit these moments around the same time. So at certain points in a map, there will be a flurry of spy planes, followed later by a ton of missiles and then planes with crazy accuracy. It adds a bit of a routine to proceedings, which is a shame as predictability in multiplayer games is always a bit of a downer.

The ‘Treyarch special’ mode. A team of humans take on hordes of zombies in a single (but admittedly large) map. There’s a lot of lore here, but essentially you need to solve the mystery and escape, or just survive and escape.

It’s tough. To properly finish the game, you need to do a lot of things. Earning points by killing zombies lets you unlock other areas, which continues to turning on the power, unlocking hell hounds from another dimension, a zombie disco… and those are things I saw after only three games! It’s utterly bananas and requires some serious coordination.

It also requires some serious underlying knowledge of what to do, as it explains very little to the players. The core concept is fairly easy – kill everything. Outside of that, you need to hope that your teammates sort of get the point and don’t just hang around in the starting area killing everything. It becomes very intense very quickly, and whilst you can extract every five rounds from round ten, just getting there is enough of a challenge.

The single map is a bit of a shame, as this may hurt replayability a bit – already, the starting area is pretty familiar, but maybe more will come down the line. I’m not a CoD Zombies expert, but I’m assured this is a bit more limited vs. previous offerings, but it’s very well done.

The total package here is decent. All of the modes are good, and unless you’re solely buying this for the single-player experience, you’re going to get more than your money’s worth. Mileage will vary I think depending on what you’re into, and if you are just looking at one single aspect of the trio of options on offer, then you may feel a bit short-changed initially.

Still, with more content coming and integration with Warzone planned from December onwards, there’s a lot to like here, and hopefully even more so down the line. I do wish it was in the Infinity Ward engine though, at points it does feel a bit like a Tencent knock-off of an already established game, but a very good one at least.

One final point to note, Cold War features a number of exclusive additions to PlayStation players. Onslaught mode gives players chance to fight hordes of zombies around existing maps. Players also get access to bonus XP if they play with a party and two extra loadout slots. This feels really grubby.

Better though are use if the adaptive triggers. Resistance is used to simulate trigger pulls, with every gun configured differently. In reality, this is legitimately excellent,  it does increase fire time, and may be worth disabling for multiplayer.