You are warned at the start, that Unto the End is different. You can lose your sword. You can bleed to death. Prepare.

I wasn’t really sure what to make of this. Unto the End starts in a Nordic, snowy landscape, as you say farewell to your family off on a presumed hunting trip. It looks like a 2D cinematic platformer and is reminiscent of games like Journey in terms of vibe. It quickly turns into something else, as after a few moments of exploring your encounter your first combat.

Combat begins against some sort of ancient cave creatures. It’s split between making and defending either high or low attacks (telegraphed by a ‘wind up’ from your opponent). You have a dagger you can throw (but must retrieve) and you can roll to avoid attacks. It’s also really, really hard.

The first time you come across a campfire, you learn that you can heal yourself. You can also recall to the springtime when you were practising combat with your family (which teaches you how to fight). This is helpful but doesn’t really prepare you for how quickly the enemies will attack, and it certainly does prepare for you multiple enemies attacking you. One enemy is challenging. Two is very, very difficult. 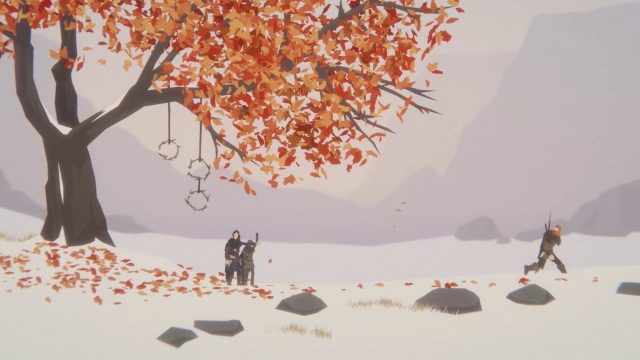 Turning combat to ‘assisted’ slows the pace down which makes dealing with one opponent much easier. Two, however, seems to require luck. If you’re between enemies and one hits high, and one low, you’re taking damage and get knocked down. Sometimes you’ll lose your sword, which you then have to retrieve. Other times, you will get hit again whilst getting up – the loop basically trapping you in a cycle of death.

Dying isn’t the end – you’d be forgiven for thinking this was a Souls-esque die and lose everything. Instead, you’re back to the last checkpoint, which can be fine. Other times it can be brutally before you were in a challenging fight, therefore having to repeat the fight. What’s a delicate combat experience, and to be fair, fairly exhilarating when you get a handle on it, can be really irritating.

Thankfully, the experience overall is so nicely balanced between these moments of action (irritating or not) and cinematic exploration. Pace is required – the deliberate pace at least, taking your time at points and hurrying at others in order to avoid traps, natural or man-made.

What you end up with is an interesting game telling a basic story. A man trying to get back to his family. On his way, he uncovers all sorts of enemies, challenges and mysteries. Don’t read basic as a negative – the simplicity is the perfect background for the emotions conjured by the brutality of it all.

As hard as it is – and it really is – I kept finding myself going back to it to try again. A little bit further, a lesson learned, each attempt is knowledge. The sounds of the world are the perfect soundtrack, I never tire of hearing crunching snow beneath my feet or the clashing of swords.

It’s not one for everyone, that’s for sure. But for something different, and something pretty darn challenging, it’s well worth a look.