When I first saw Doodle God Evolution, my initial thought was that this was going to become a friendly game of building up the world bit by bit, discovering new things and generally having a nice relaxing time of playing God. Unfortunately, what arrived was something more akin to the decade-old mobile game bearing the Doodle God name than anything you’d expect to see on your PS4.

Essentially, the entire purpose of both game bundled here – Doodle God and Doodle Farm – is to match up different elements, items or creatures to create new ones in a God-like way. You might mix stone and fire to get lava for example, or a dinosaur with a fish to get a dolphin.

Yeah. Some of the combinations in Doodle Farm are downright bizarre, although there is some logic behind a lot of what you need to unlock. In Doodle God for example, steam is unlocked by combining water and fire. Later down the line you can mix up air and an egg to make a bird, or put wood and water together to make a boat. There is some amount of sense in most of the combinations, but after a while and having unlocked lots of different things experimenting to find the perfect mix can get pretty tiresome. This certainly isn’t something you’ll be sitting for an hour and playing. It’s the kind of game you’ll put on for 10 minutes while you wait for another game to download, or to maybe drop into on remote play while the kids are watching Hey Duggee on the TV. But it’s a mobile game dressed up in a console shaped suit, and there’s no getting away from that. 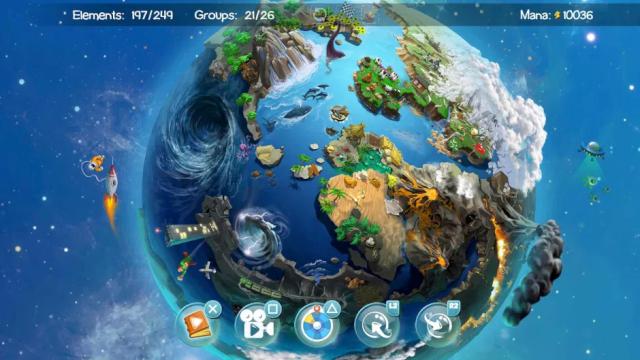 And that’s really the main problem here. Not much has changed since the mobile version, and while it’s ok for a while in short bursts there isn’t much to really keep you coming back unless you’re a completionist who wants to make sure they’ve seen every last thing on their planet or farm. And whoever the hell is telling me – GOD no less – that I’m doing a wonderful job, or should try harder… who’s bossing God around like that?

So while it’s nice to see your planet and farm build up little by little, is that enough to spend money on this? I’m not convinced. The audio isn’t great, the gameplay loop is tedious and repetitive, and even as a double pack of games it’s just the same things over and over. It’s a tough one to recommend, unless you can get it for next to nothing in a sale at some point.