3D platformers are pretty common, so to get noticed in such a crowded genre is tough. And yet Pumpkin Jack manages to do exactly that, mixing a very cool halloween-style setting with some tight gameplay and controls to become a very respectable and enjoyable game.

The Devil, being the arse that he is, has cursed the world and turned it into a bit of a shambles. A wizard is trying to fix things up a bit, but the Devil has sent Jack (controlled by you) out to try and put a stop to The Wizard – don’t get the impression you’re saving the world here, you set out to do quite the opposite. Along the way a crow (who you can throw at things as a projectile weapon) will accompany you to point out what a bad job you’re doing and general drop as much sarcasm on your head as you could hope for. 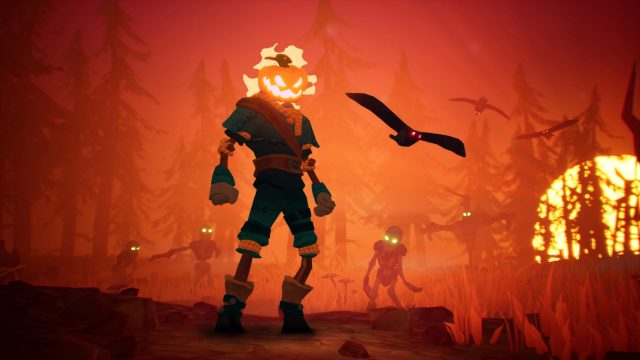 There’s a decent amount of variety in here; you’ll have moments when it’s a pure platformer and you’re trying to get from A to B without getting lost, other moments when you’ll be fighting against enemies and sections that need you to actually engage your brain and solve a puzzle or two. And it’s all accompanied by a great musical soundtrack that fits the bill perfectly and does a really good job of maintaining the darker tone of the game.

The weapons you pick up along the way are ok, but there’s nothing you’ll come away with wishing you could use in another game. They’re fine, just don’t do much to excite. Smacking things with a spade is just as effective much of the time. Another element I wasn’t sure about was the lack of voiceovers, and while I get that this reduces development time and costs considerably, it’s a shame that some really cool characters didn’t get any kind of vocal personality. There’s a lot of potential here!

There’s also a lot to find, with numerous collectables scattered through the game. You’ll only want them if you’re a completionist though, they don’t do a fat lot for you, but if you like to see a nice pretty 100% on your games you can always play through again. Realistically though that’s the onyl reason you’ll want to do that; the game itself probably isn’t worth a second play through for any other reason.

So as a 3D platformer Pumpkin Jack is good fun, it’s just a shame that it wasn’t finished off with a good dose of voice work and some more exciting weapons. Still, if you like this kind of thing then the 8ish hours you get out of it will be time well spent.