They were so preoccupied to think about whether they could, they didn’t stop to think whether they should. A classic line from the original film, and my worry that it would apply to the Jurassic World Evolution 2, a worry that came to live 15 minutes in but thankfully managed to turn it around.

Picking up where the first game left off, sort of – Evolution 2 has a closer link to the events of the films. The campaign mode basically has you run through what is an extended tutorial of sorts, delivered by Bryce Dallas-Howard (from the films!) and a really bad fake Chris Pratt (a picture of him from the films, and a voice actor who does a worse Chris Pratt impression than me). Dinosaurs are running wild in America, and naturally, the thing to do is to capture them and turn the areas into dinosaur parks.

Fake Chris Pratt is the immediate warning sign that things are not going to be quite so tidy this time around. Coupled with terrible shadow pop-in (on Series X), the first impression is not good. Principally, your objective here is the same as the previous game – get dinosaurs, make them happy, make your guests happy, try not to let your dinosaurs kill your guests. There’s obviously been a high-powered review meeting somewhere, as there’s a lot of mechanics that have changed since the first game.

To start with, a lot of park micro-management has gone. You don’t worry too much about shop prices, and park cleaners or even ticket prices to get in. Guest management is also very high level, so you’ll be forgiven for thinking what exactly it is for you to do. Well, your job is pretty simple – catch dinosaurs, breed them, and make enclosures for them. There’s a shift more towards the environment and animal welfare now, which in a way is good. Animal management is pretty limited though to see how much company they want, how much space they want and how much vegetation/food and water they want.

So when do we get to the good bits? Well, it takes a while. Starting in the Arizona desert, the second campaign level takes you to a snowy wilderness. I’m all prepared for the challenges of how I’m going to heat my cold-blooded animals, but sadly the weather has no impact whatsoever on them. Also limited are customisation options for your various shops, so you’re really left with just dinosaur pens to build. Even rangers are mapped on radial points now, so you’re playing park-Jenga to get the correct coverage. It’s a bit like a park builder min/max exercise. 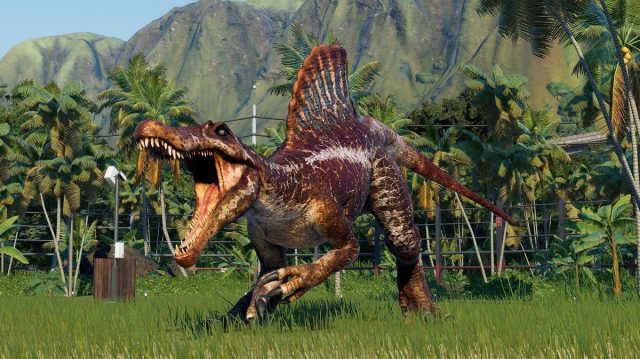 Fortunately, the dino stuff is good. They look great and shadows aside, driving around with the rangers to view them never stops being awesome. There’s a lot more attention on the manual driving and shooting (tranquillising) of dinosaurs this time but fortunately, that too can be automated. In particular, the breeding of them involves monitoring and detecting their traits, making sure that aggressive genes are well balanced and you don’t end up with a herd of killers who hate fences.

Monitoring your staff is important too – at least the researchers who, if they get upset, will sabotage your park in their best Dennis Nedry fashion. Sadly, you can’t watch them stroll through a dilophosaurus pen to escape. There are a number of scenarios to play through from the films though in the Chaos Theory mode, voiced over by Jeff Goldblum himself. As a fan, I just found this super cool, with some rewards for completing challenges allowing you more flexibility in the sandbox.

The sandbox though – surely where the fun would lie, but it starts out gimped until you play through the game and start unlocking stuff, some of which is exceptionally hard. One map is only available to begin with, which also feels a bit stingy. Whilst there are dinosaurs to unlock, the best ones are available near the start so this isn’t too bad, and for the first time, you get to build some impressive water sanctuaries for the big fish dinosaurs. Annoyingly, when you place water it’s just a big puddle, whereas the proper enclosures are more ‘ready made’. Still, it’s really cool to see these in place.

As much as I enjoyed the first Evolution game, it wasn’t without faults, and Evolution 2 goes in a different direction, so rather than fixing those faults, totally sidesteps them and gets into a whole new load of bits that may annoy you. Still, managing your dinosaur empire still remained fun for me, and even though they couldn’t quite get all of the voice actors to turn up, it does enough to pay me some fan service.