MX vs ATV is back with a new game, also throwing UTV (utility terrain vehicles) into the mix. But, if you’re expecting a close-fought battle, I’m sorry to spoil it: MX wins. By some margin.

MX vs ATV Unleashed was one of my favourite games, and Rainbow Studios have, over the years struggled to recover the magic that made that great. The good news is that MX vs ATV Legends shows great promise, but sadly it’s very much laying the groundwork for future releases as Legends is anything but legendary.

Beginning with a lengthy tutorial, it’s nice to have an MX game that actually takes the time to explain all of the dynamics to you. It’s a bit slow but at least you get the hang of it, until you start to understand the dynamics of controlling the bike with the right stick, and using the ability to flip in the air using triggers. There’s a weird combination of commands to balance weight on the bike and preload for jumps which boggles the mind and seems unnecessary and complex vs. the Milestone games which typically use the left stick for the bike and the right stick for the rider.

The complexity increases through the tutorial to a point where I’m screaming ‘but I am pressing it’ at the TV as it won’t let me move on, before learning that I simply need to drive to the end point of each tutorial to progress, so can just go around the jumps. The tutorial is over, and it’s time to see what the game is all about.

Set in an open-world hub area, there are people to talk to. This acts as a paper-thin plot between career progression which is set between each of the specific disciplines. Racing around it gives you a good feel for the bike, which is actually a delight to control, notwithstanding the stick issues mentioned earlier. It feels fast and nimble, with a good sense of speed. It lacks the slightly flakey, over-sensitive springy handling of the Milestone games which I enjoyed, and I suppose if you are going to focus on anything, then the handling is the one to go for. This is what was decided clearly at Rainbow, as the visuals and audio are awful. 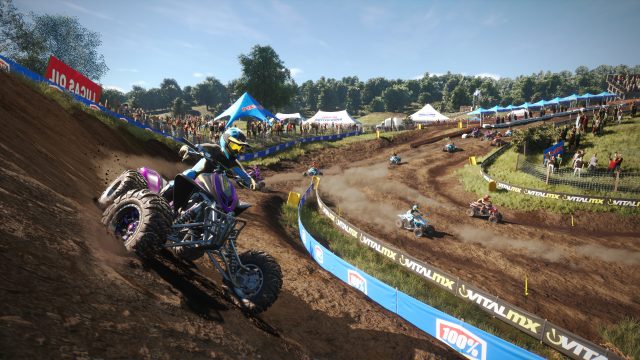 It’s not, initially too bad to look at. Then it moves, and it’s a bucket of yuck. Pop-in, frame stuttering, and gross textures are all over the place and clash with some actually rather nice-looking artefacts. The sound is even worse – it sounds incredibly low res as you rev your bike, and getting into a race the audio mix is all over the place, with opponents far away seeming way louder than yours. Tannoy system music blasts out across the tracks and changes depending on your location, which is good. But the track noise as you go onto off-road bits just completely dies, it’s like it’s streaming the sound on a dial-up connection, as it cuts in and out. I solved this by turning the volume off and listening to Spotify.

There’s some purpose to the hub area outside of being a practice ground, with some collectables to find which gives you a reason to race about, in turn helping you perfect your skills. All off-road MX and SX bike games are having this at the moment, and if I’m honest feels like a bit of a waste of development resources. It’s nice it’s there, but does it add anything?

Bikes in the bag then, despite issues, but what about the other vehicles? ATVs are dross, really. They handle like garbage, and the animations take a bigger hit than the bikes. Essentially, on MX and ATV, your riders will sit or stand depending on if they want to preload for jumps, so the AI is up and down around you all the time. The problem is there are only two frames of animation for this – up, and down. No in-between. As a result, you get a horribly, poppy, stuttering mess on screen. First-person mode helps as you’re more focused on not crashing your face into the ground until they get in front of you when it’s an instant seizure warning.

UTVs are a bit like buggy races but with a car chassis. They make the most of the tracks, although oddly some of them get very tight and winding, which can result in huge pile-ups. They slide nice enough and actually are more fun to drive than ATVs as long as you avoid the jumps, then they float.

Let’s talk tracks then – which are pretty decent. There’s a big variety, ranging from the classic stadium MX tracks to outdoor supercross ones, and sprawling outside locations around mountains and various landscapes. Deformation is cool too, and the experience you’re belting about (assuming you’re in the bikes) is actually not bad.

In summary, MX vs ATV Legends is not good. It has its moments, but these are too sandwiched between poor graphics, animation, sound, career progression and online play (which is also a hot mess). It’s tough to recommend on this basis. A recent patch made some improvements but the bigger issues are yet to be addressed, so worth holding off until then.