We were sent a selection of Steam Deck accessories to test out by JSAUX. My Deck has been looking a little lonely since it arrived, despite the addition of some thumbstick caps, so JSAUX have just landed with their suite of accessories at the right time.

First up is the Upgraded Docking Station for Steam Deck (HB0603). The docking station doesn’t quite do what you’d expect by the name. It’s a plastic stand that the Deck sits in (rather than dock, like the Switch) and a USB C cable goes into the top. This allows the Deck to utilise the ports on the back – an HDMI for output to a screen, a USB C for powering the Deck, and 3 USB-A 3.0 ports. The nature of the Deck means it can’t be docked like the Switch anyway (as the USB C is on the top) and this works perfectly. It looks tidy on my desk, and better than having the Deck lose with all sorts of cables everywhere. It also has an anti-slip bit inside the stand, so the Deck won’t slide out (if it’s not using a case).

Protective Standing Case for Steam Deck – this is a hard plastic shell that the Deck slips into the bottom first, with a clasp over the top which secures it. It adds a tiny bit of bulk to the Deck, but not much, and adds some texture for added grip. On the back, there’s a flip stand which pops out so the Deck can be positioned up on a table, so if you’re taking it portable and wanted to watch something, or perhaps play two-player games with controllers, then you can. I really liked this case, although sadly it does not fit in the Upgraded Docking Station.

Silicon Protective Case for Steam Deck – the silicone case is basically like a second skin, adding minimal bulk but some protection for bumps and scratches on the Deck. It also has some extra textures on the front, in order to aid a better grip. It was a bit tricky to get on, I really had to stretch it but it retains its shape with no sagging, and didn’t rip (which I was worried about). 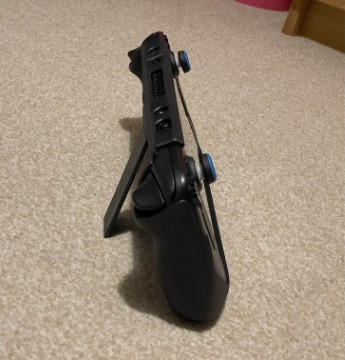 Tempered Glass Screen Protector – I was a bit worried by this one, as the screen protectors can be funny with things like reducing touch capability. Thankfully this one from JSAUX goes on easily, I’ve had no bubbles appear and it does not seem to have compromised the capacity of the touch screen, or visibility. I’m using the mid-range Deck which does not have the anti-glare screen, so can’t comment on the impact of that model.

I’m not familiar with JSAUX products but have been pleased with this selection and in lieu of an official dock from Valve, the Docking Station, in particular, is a must-have for any Deck owners like me that want to use it with additional screens. There’s lots of other bits and pieces available on their website, so take a look and see what takes your fancy: https://www.jsaux.com