There’s never been a game more focussed on John Madden himself than Madden 23. Following the passing of the man himself, the team behind this year’s iteration have decided to give a strong focus on the legacy of one of the sport’s most well-known coaches and broadcasters. It gave me pretty strong memories of my earliest times with the Madden games, all the way back in 1991, playing Madden ’92 on the Mega Drive. At the time Madden himself was front and centre; he was on the box and was the first thing you saw after the punchy EA Sports logo, so after several years of his name being the only link to the games it’s a really nice touch to bring the focus back to him following the sad news earlier this year. And, just for good measure, there’s a few really cool new features to enjoy in this year’s game as well.

The big focus is on the Fieldsense system, a series of new mechanics that help you take more control on the field. The most prominent of these is the new passing controls, letting you direct your throws more accurately and with more control. Now, instead of picking your receiver and hoping the ball ends up where you wanted it, you can give your quarterback a more specific area to aim for in the hope you can find a gap, confuse the defense or give your receiver more of a chance to grab the pass in stride and make up a few more yards. Initially it’s a bit tricky to get the hang of, and you might be chucking the ball straight into the hands of your least favourite cornerback for a little while, but after a couple of games getting to grips with the new system it’s extremely hard to go back to the more traditional “jab and hope” method. It really makes a big difference, and taking to the field with Kyler Murray chucking some pin-point throws for DeAndre Hopkins to grab and sprint for the touchdown is a fantastic feeling. It’s less frustrating than watching the Cardinals themselves, that’s for sure…

Also improved under this new system is the running game. Now more than ever you’ll be rewarded for not just charging forwards with the sprint button held down. Easing off the speed to dance and turn your way between tackles, nipping through blocking lanes and closely following the play design will reward you far more than just trying to plough on and hope for the best. If your offensive line are doing their job and you’re willing to look out for the gaps to appear there’s some serious yardage to collect. Get it wrong though and you’re about to see the result of another on-field improvement, and that’s the way that tackles are animated and actually make impact with the opposing players. Instead of pre-packaged animations that will play out whether they properly fit or not, the idea is that player models react more accurately, and it’s a theory that mostly plays out well, barring a couple of slightly unusual moments where things don’t quite go to plan and it all looks a bit odd. But mostly it’s a system that works well, and putting all of these things together along with some additional defensive improvements gives some of the best on-field action you’ll have seen in a Madden game at any point in the past 30 years of action.

For me, all of that was exactly what I was hoping for. I’ll go into the various game modes in a moment, but in the same way I look for quality racing above anything else in a racing game, or atmosphere and storyline in an open world RPG, it’s the on-field gameplay that I really wanted. For someone who doesn’t always have time to spend years in Franchise mode, and doesn’t want to throw money into Ultimate Team, jumping into a standard season or playing one-off games is where I tend to be with Madden, and if you’re in the same boat you’ll absolutely love what’s new here. 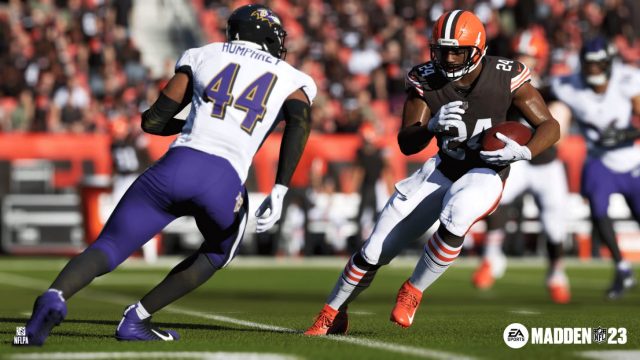 But for those of you who like a longer-term game mode, let’s see what’s what amongst the old favourites.

Ultimate Team has seen some tweaks, most notably the addition of Field Passes. These free-to-earn rewards act a little like a free battle pass, side-stepping the insistence of paying for everything by giving you rewards for completing various tasks and objectives. They’re a nice extra (who doesn’t like free stuff?) but feel a little bit wonky and unbalanced, I suppose to encourage people to still focus on the “proper” ways of collecting packs and players. But they’re a worthy addition, and with some finesse in future games could be a bit of a game changer with how you build up an Ultimate Team. It’s still quite addictive, and the mobile companion app is a nice way to pick up new players on the go, but there’s not much by way of amazing new cutting-edge changes. it doesn’t help that it’s still a bit buggy as well, with invisible packs making it hard to see what you’re actually unpacking and the screen just freezing on the background for uncomfortable periods of time. I also had a weird issue with player stats being way too big to fit on the screen or being ridiculously tiny, so there’s a bit more fixing to go yet with the general interface of UT.

The Franchise mode has been bolstered by a more useful scouting system which hones in on the useful stats for each player instead of telling you in great detail just how good at tackling your wide receiver is. As such you can more easily find the next big thing or a player which will suit your play style better than the seemingly clueless numpty you’ve been dumped with from day 1. Signing new players has seen improvements too, with free agents considering not only money but also the chances of them playing and even whether they want to live in the state your team is based in. It might mean a payer you’re desperate for as a backup doesn’t fancy signing up, but could lead you to getting the jump over another team for a potential star.

Speaking of franchises, Face of the Franchise is back as well, giving you the job to take your rookie and lead them to the Madden 99 Club. It’s… well, pretty much the same as before. It’s interesting enough if you want a storyline to follow, but not something that you’ll play and be desperate to talk to people about. If you enjoyed last year’s story then you’ll get some fun out of this, but I’d be surprised if this was any kind of focal point during the game’s development. It feels like it’s there because it needs to be, more than it actually being something that will ever be screamed and shouted about.

So giving Madden NFL 23 a final score is awkward, because it entirely depends on what you want out of it. The on-field action is very good and the new Fieldsense stuff is genuinely game-changing in how you approach the action. But between a messy Ultimate Team, a half-baked Face of the Franchise and a few weird bugs here and there the overall package isn’t quite what it might’ve been. As for whether it’s worth updating from last year, again it all depends what you’re after. If you want some amazing new game modes or a brand new MUT mode, then maybe give it another 12 months. But if you want the new gameplay mechanics (and the new throwing mode is worth it alone) and just want to play a few games and have a laugh, you can easily add a mark to the score.