Like my previous Call of Duty reviews, let’s split this bad boy into parts.

Following on from the first game (the 2019 version), Modern Warfare 2 is a much smaller-scale game. By that, I mean you still have the massive set pieces and explosions, but the action features a lot more heavily on the moving through and clearing rooms approach that you’d expect from special forces. ‘Move and shoot’ is the name of the game here, and at its core, it’s absolutely exceptional.

Ok, so the plot is nonsense. Some missiles have gone missing, you have to track them down, there are terrorists, yadda yadda. There are bad guys who need shooting, so you go and do it, skipping between different characters to progress the story across a variety of incredible locations. The characters are important, and thankfully they’re brilliantly voice-acted with some frankly incredible one-liners, even if they do say ‘Rog’ a lot.

They’re also quite something to look at, with incredible facial and eye animation. Lighting, explosions, flashes, particle effects – it’s all stunning and constantly breath-taking, it really feels like they’ve pulled out all of the stops here to deliver a fantastic experience.

It’s not the longest campaign in the world, which as part of the overall package suited me just fine. Supporting the frankly incredible gunplay too are a number of mini-concepts used briefly and then discarded. For example, at one point you’re sweeping for trip mines, at another, you’re directing a character on a killing spree using security cameras, and then you’re crafting weapons straight out of The Last of Us. It doesn’t always quite hit the mark and can jolt from the action a bit, along with some of the set pieces (such as an incredible car chase) which go on for just a bit too long, but for the most part, there’s enough variety which mixes up the ‘move and shoot’ to keep things rolling along.

The bad news – is it’s pretty frustrating in parts, with a number of ‘easy fail’ points, whereby you get spotted as you weren’t supposed to go in that exact spot, or a Call of Duty equivalent of boss battles which are more frustrating than anything and are a worrying precursor of what the upcoming Raid may turn into. Nonetheless, I thoroughly enjoyed the campaign, even if it is excessively violent.

The meat and potatoes of the Call of Duty series return with 10 maps and a variety of the usual modes. The map variety is pretty good and there are more winners rather than losers, with no real stinkers.

Customisation is the name of the game this time around. Operator skins are different each time which is a nice correction from prior games, but the star of the show is the weapon arrangement. Once you select your gun, you’ve got some levelling to do which unlocks attachments, ornamental dongles and colour ways. The attachments provide a vast number of different possibilities which you can use to perfect your shooting.

Unlike prior games though, to get all of the bits and pieces unlocked you’ll need to play with all of the guns – as they unlock attachments on other weapons. This encourages experimentation, and colour ways aren’t just locked behind time played or kills gained. Each has challenges specific to certain weapons to unlock them for other guns. Want a bright green assault rifle? You’ll need to get 30 prone kills with a Hurricane SMG. It’s a nice touch which will add to longevity. 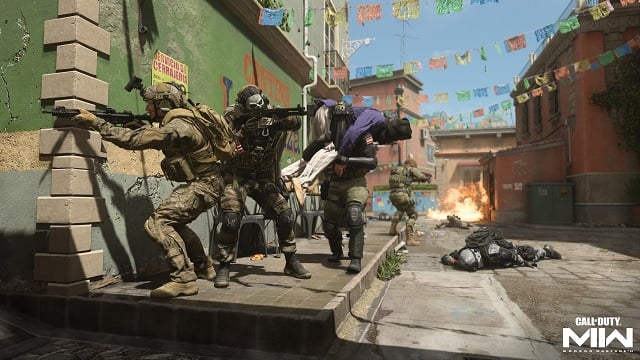 Further adding to customisation are perks of different levels, which unlock based on your ability through the game. My current build has one where, assuming I score enough points, I get a small flash on my screen when someone nefarious is looking at me, letting me know it’s time to get into some cover. The time-gating won’t be for everyone but it does add a nice degree of evolution over each match.

Killstreaks are back too, with increasing savage rewards available for the more people you kill without dying. Not so good at the killing? Swap to score streaks where you’re rewarded for playing the objective (and getting kills). It is another, further customisation option which should give everyone a chance to balance the game to their play style.

All of this is lovely but won’t cut it without the gameplay is good. Thankfully, it is. CoD moves quickly, but the focus is on tight gunplay and the feel of sweeping through levels in single-player, covering corners etc. is alive and well here. Each game is a fast, intense adrenaline rush requiring fast reactions and reflexes. With player levels, gun levels, unlockable attachments and colourways, there’s a lot to keep fans playing and coming back for a long time.

The last part of the triangle is Spec Ops mode. These are three narrative-driven two-player cooperative missions. The first requires you to locate and extract three nuclear devices under the cover of darkness. The second has you blow up three SAM launchers in broad daylight across a desert, with a lot of noise. And the final one is a more classic horde mode consisting of six increasingly hard waves.

There’s a lot of variety across these modes, all of which require teamwork and close cooperation, with some on-the-fly decision-making thrown in for good measure. The narrative element I can take or leave to be quite honest (it’s Call of Duty, I’m basically just going to shoot stuff up) but it’s nice that they’ve put some spit and polish to it. A levelling system will reward repeated play over time, with a number of unlockables in each level too which reward players with various bits of intel and weaponry.

The base package of Modern Warfare 2 then is very good. As season one approaches this Wednesday, we will see how it all fits in with the new Warzone mode, the DMZ Tarkov-esque experience, as well as the slightly reworked Battle Pass. New maps arrive in the classic multiplayer experience too (for free), so it looks like the commitment to the franchise is strong, and a new year of Call of Duty kicks off with a pace.