In many ways this years FIFA game is very much like last year, and the year before that. There is, of course, the usual array of visual improvements which this year bring that extra little bit of realism to the movements of some of the more well known players. Alongside that you’ll find the usual game modes including the ever popular cash cow that is Ultimate Team, my own personal favourite of the online seasons mode, as well as both player and managerial careers available. But as usual the question is why, other than the idea of buying the very last of EA’s FIFA titled series, should you actually go and spend a sizeable wad of money on this year’s game?

The answer, as it probably should be, is found on the pitch. This year’s action is a touch slower than last years and more deliberate, giving it more of a feel of the Pro Evolution series when it was at its peak. Back then the more realistic on pitch action put FIFA to shame, but it is now EA’s title which boasts some of the most rewarding, realistic, and outright fun gameplay available. It’s now far easier to play to the strengths of particular players, letting you sprint with speed down the wing with your teams quickest players, or ping super accurate crossfield balls to kick start a lightning quick counter attack. And between the movement of the players, the wider variety of goal keeping animations, and an ability to actually use the individual strengths of individual players means getting to know your team and understanding the strengths and weaknesses can make a massive difference to the outcome of the game. There’s also, as you’ll know if you keep a close eye on social media, a new PowerShot available. Performing a PowerShot gives you purely manual aim when you shoot, but doing so brings about a dramatic but gentle zoom in on the camera in the hope that you’re shot manages to wedge itself in the top corner and not fly off at an angle and smack someone in the face in row F.

Elsewhere there is as you might hope more focus on the women’s game, and the World Cup update sees not only the men’s World Cup featured, but also next years women’s World Cup as well. If you fancy trying to take the lionesses through the tournament and repeat the success from last years Europeans championship you can absolutely do that when that part of the update arrives. 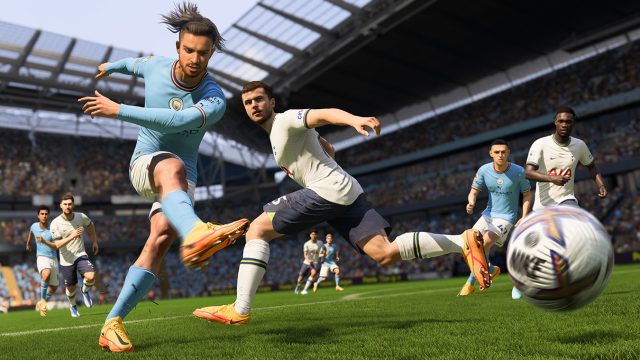 Really, you know what you’re getting with FIFA by now. There’s always someone online to have a kick about with, and if not there’s the ever-wonderful option of playing with someone sat right next to you on the sofa. There’s game modes with such variety that you’ll be very hard pushed to find there’s nothing you want to do, and the depth in leagues and teams across the world is staggering. At some point however, it would be nice if EA took a look at the commentary and gave it a bit of a shine. It feels like we’ve had the same lines throw notice quite a while now, and perhaps moving on from the FIFA branding code awesome give an opportunity to rethink how the commentary works and bring about some changes or updates to make things feel a little bit fresher. It’s not terrible, it’s just all been done before and lacks a little enthusiasm.

So the big question here is whether or not it deserves your hard earned money just to get the final FIFA game that EA will be producing. There’s a few nice additions, such as the ability to play highlights in career mode instead of simulating entire games (a nice feature presumably plucked from recent Madden games), but whether they’re enough for you will depend on whether you feel the need to buy yet another annual update. If FIFA is life, then you absolutely should. If you’ll put dozens of hours into the career mode or Ultimate Team, then absolutely grab this. The question mark hangs over whether or not everything else is worthy of a casual player who also owns last year’s game. It might well be… just. But it’s a closer decision than it ought to be.

Roll on next year – it’ll be fascinating to see what will happen when the FIFA name falls off the box.