God’s trigger is a hellacious blast. It’s over the top instant fun, with a cool if little formulaic story.

The archangel Gabriel is being a dick, and for reasons unknown you, an angel called Harryz are ripped from your wings and tossed down into earth to suffer the apocalypse with the rest of the earthlings at the hands of the four Horseman. Miffed by this, you decide to save earth by teaming up with a devil called Judy and hunt down the four. If this all sounds a bit weird to you, then welcome to God’s Trigger.

The most similar style of game to compare this to is Hotline Miami. Rather than pixelated, a 3D cell-shaded style is used over the top-down camera angle. Given it is 3D, the levels move slightly as the camera pans over the action. It’s a cool effect, and loads of little details around the level such as bins which move as you walk into them, chairs which fall over all add to the atmosphere. A simulation shooter this is not however, as it’s very fast, and deadly.

Like Hotline Miami, one hit will kill you. Similarly, one hit will kill (most) enemies too. And how you get to kill them is really the point of the game. Again, like Hotline you can pick up guns or throwables and use them using the classic twin-stick shooter style of one to move, one to aim and a trigger to fire. But your character has other weaponry at their disposal which is where the depth and strategy of God’s Trigger comes into play.

Designed for co-op play, in solo mode (which is how I played) you can switch between characters at will. The benefit here is that Harry has a dash and a close combat sword for melee, while Judy’s melee attack is a chain with some range, and a teleport. Both of these have pros without really any disadvantage but I found my time was spent split equally between them. Harry’s dash is useful for bashing down walls (or doors) and slicing up baddies. Judy needs to be used to teleport around certain gates to progress through levels, and her melee range helps avoid danger and pick off enemies from distance if and when stealth is needed (there is one mandatory stealth level but it isn’t too bad – stealth can be used throughout the game though).

Supporting base abilities are special moves, with a meter that builds with kills. This could be a warping portal to suck enemies in to help you kill them, mind control to take over one to shoot another, invisibility, time freezing and more. Abilities are unique to Harry and Judy so your mileage with each character might depend on what abilities you use. Perks also can outfit them with abilities to not be harmed by explosions, take an extra hit or move faster. Finally, each ability (dash, teleport), melee skill or special move can be upgraded and customised. Each ‘level’ lets you choose between three elements, such as speed, cool down, range, duration etc. This allows you to really customise how you play. 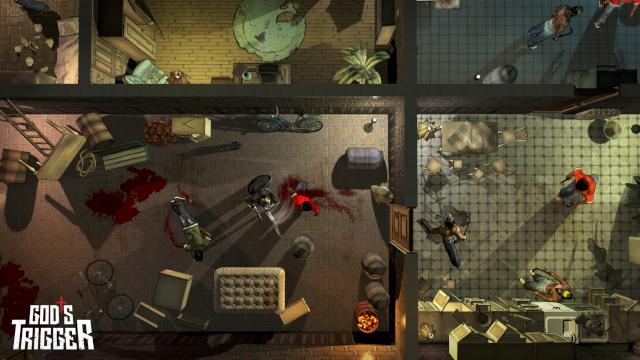 I actually found myself not really relying on much other than the core ability, melee and whatever I found in the levels. I upgraded Judy’s chain to rip through more than one enemy at a time, and then to return any weapon they had to me. Harry’s sword was useful for quick multiple slashes and I elected to have it deflect bullets. Very cool. By the end of the game I had used them equally, and no real preference on either – so they are well balanced which should stop arguments in co-op.

The levels are designed well, with the horsemen lore steering away from the doom and gloom in a Biblical sense. For example, Pestilence is posing as a cowboy actor on a movie set. Famine is holed up in an Abby, eating… err… people and Death is running a drug ring with a motorcycle gang. These locations are interesting, but what sets the whole thing apart are the various mechanics.

Different enemy types make you think of your approach and at times you benefit from the ability to target foes. If you have enough special meter you can ‘lock on’ to them and run, shoot them and enable a bullet time slow motion. Various things are used throughout the game, be it slow motion elements, cool sniper spots, boss fights – varied enough to keep you playing what is all-in a fairly short but enjoyable runtime.

If I’m picky, some of the boss battles were a tad annoying given the one-hit and die nature of God’s Trigger. But the checkpoints are pretty generous (and instant) so it’s not terrible. The dialogue is cheesy but this isn’t really a downer – depends what you’re after.

There’s some longevity in collectibles (lad mags entitled ‘Helljoy’ dotted throughout the, but is just a bit skimpy) and Arcade mode – select custom levels for you to complete. God’s Trigger is a great laugh. It’s easy to play, and is unnecessarily violent. It’s possibly a little over-engineered by way of upgrades and abilities but that doesn’t stop this from being a brilliant shooter.