Sekiro is really hard. You’ve probably heard this already. Maybe you’ve played the Souls games before. Perhaps you’re no stranger to hard games. Well let me tell you, this is really, really hard.

To be fair, the game does a reasonable (wish) job of explaining things to you. A third-person adventure game, your life begins at the bottom of a cave. Tips explain the basics to you, and immediately differences to the Souls games are apparent. No meter to measure your stamina, that’s gone – slash away. A basic attack and a block/parry are your defence. How hard can this be?

It turns out, mercilessly. As I begin, I learn that I can block attacks, but doing so eats into my ‘posture’. If your posture breaks then you are vulnerable. This applies to the baddies too, break their posture and it’s time to go crazy on them. Parrying opens up the opportunity for a counter-attack (blocking at the correct time). Once you have worn down your foes enough, the opportunity for a ‘deathblow’ occurs – signified by a small red dot on your opponent. This one-hit-kill (usually, bosses take multiple) defeats your foe. Simple.

Only it isn’t. Attacks from multiple foes require quick parrying and counters to be successful. You can’t get hit many times, so you need to be careful and you never know what lurks. The Souls-esque lantern system returns here, but there are a few red herrings making you feel that it’s more generous than it appears. For a start, you have a health potion which can be upgraded (similar to Soul’s flasks). Quite quickly you can increase the uses of these, and once dead you get a chance to resurrect (depending on how much you’ve filled the appropriate meter). So you get more chances – brilliant! Kind of. 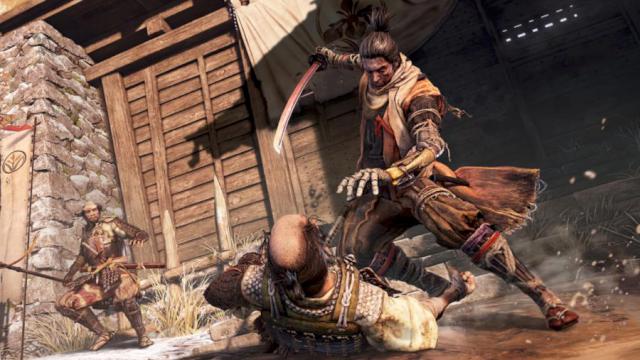 The downside is that the more you die, the more NPCs become infected with Dragonrot. I’ll say no more for fear of spoiling but mechanics are continually introduced that make you question if it is as hard as you think it is. A prosthetic arm can be useful for using things such as axes to take out shielded enemies, or firecrackers to distract them. Another benefit for you, but at the cost of more complex enemy types. Various items drop all over the world with a sort of tease as to what they do – you’ll need to experiment. Also, it’s fairly open or appears to be. Narrow pathways reward exploration but are you heading towards somewhere you shouldn’t be, and aren’t high enough level for? Go have a fight. Find out.

One thing I really like with Sekiro is that the levelling is a lot simpler. Rewards for killing bosses (or mini-bosses) eventually give you an increase in healing, health bar or power level. Not having to worry if my agility is high enough is a favourable element for me. You lose money and experience when you die, but experience unlocks an upgrade point (which unlock abilities) and you never lose those points so it’s almost like a soft lock where you can grind to, to secure the points.

The combat is the selling point here. It’s fast, you need to be aggressive. Watching for your opponent’s attacks, dodging, countering, these are all key. You have a grappling hook and if the going gets tough, you can often grapple away and take a moment to recover. It doesn’t always help. I was on a particularly good run and wondered if I should stray into an area. I did, the area got locked behind me (with the Soul’s classic wall of fog) and a massive beast charged towards me, on fire. I died.

Reviewing a game which is so hard, you can’t kill the first boss is a struggle. I tried, and tried, and tried. I killed him. Oh, how I laughed. Turns out, he wasn’t the main boss. Just a mini-boss. Pushed onwards I did and got to the next one. Many attempts later, he fell. Another mini-boss. Finally, the main boss. Many hours later, he dies. Can I review the game after just killing one main boss? Probably not.

I feel war-damaged. Sekiro is not for the faint of heart. Many more bosses have fallen, and I still don’t really know what is happening at some points. NPCs give you vague clues as to what to do or where to go. The story slowly uncovers as I crawl back to the main hub for some advice, healing and combat practice. Slowly, bit by bit I make progress through Sekiro. But it never, for me feels like I’m really rewarded. 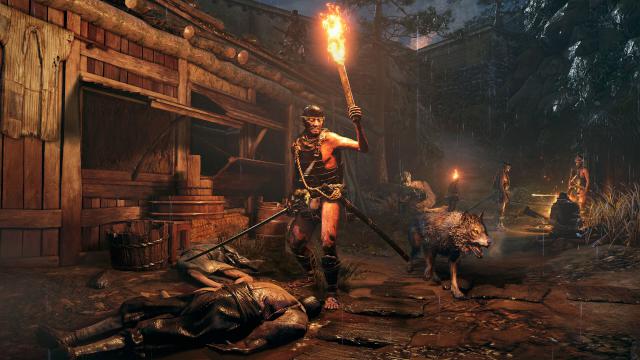 In hard games, once mastered you get a sense of achievement. Personally, I find with Sekiro that as I move forward I get a slight sense of relief then dread, that another really hard bit is up ahead. I don’t mind the difficulty, but the constant barrage of challenges means that I never really feel like I master it, but the game is bludgeoning me down. This probably changes depending on your ability to play the game and proceed with it. Those after a significant challenge will surely get it.

I also found the monstrous creatures less enjoyable than the ‘normal’ ones. I like fighting with samurai. Yes, it’s punishing, but a sword fight should be. Then the poisonous creatures come out, and I need healing. Or burn damaged, and that needs treating. Enemy variety is a key, but the mix of fantasy with samurai comes at the expense of another layer of difficulty here, one which I don’t know.

By this point, you’re probably thinking that I am rubbish at games, or should stop moaning. Maybe even just go play an easier game. But Sekiro is good. The environment is fascinating, the story intriguing.  The combat is great, and the traversal is fast and varied with a number of multiple routes to take for each engagement. But in a time where accessibility in games is taking significant strides forward, why am I so restricted in my ability (or lack of) which prohibits me from enjoying this game. I can sword fight with the best of them, but a giant snake smashing me with a one-hit kill, costing me experience points and currency which I did not even see coming. Maybe there could be a mode where I take the hit, and enough to warn me to be cautious, perhaps survive, retreat and re-approach.

As it stands, I am pushing through Sekiro. It’s a fantastic game, immensely challenging and interesting. It’s simple to play yet incredible punishing. Your levels of frustration with this will deem the mileage you get out of the game, but as such it’s very hard to recommend to even the most hardcore (or masochistic) of gamers. Games are to be enjoyed. Sekiro sadly beats me down just a little too much to enjoy it fully.