First, there was the book, then the film, and now the game. I’ve not read the book, but I have seen the film, and I can tell you that if you’re thinking you’re going to get the chance to play as Brad Pitt, you’re mistaken. That does not happen. However, that’s the bad news. The good news is that World War Z is a fun game, worth playing, especially if you have some friends.

It would be very easy to write WWZ off as a ‘third-person Left 4 Dead’ but honestly, that’s probably the best comparison I could give. You start a level as a party of four, each made up of different characters. There’s some very loose backstory but in essence, you want to get through the level to the exit. And zombies are in the way.

The very first level almost tricks you slightly into thinking you can stealth your way past them. You can sort of, for a short time but there are so many, ultimately you will get spotted. Then the chaos ensues – if you’ve seen the film, you’ll know what to expect. They are runners – they’re fast, and there are a lot of them. This is the next thing you’ll notice – and you’ll be impressed. The film was symbolic with its zombie ‘pyramid’ – them chasing as a crazed horde, so ferociously that they start piling on top of each other and in effect allowing them to scale walls.

This is terrifying – the game does a great job of handling this. It looks brilliant and as you throw grenades or start picking them off from the pyramid, it just continues to build. On this element of the first level, I thought I had the game mostly figured out – but there is a little more to it. Firstly, set pieces allow you to prepare yourself and then ‘start’ the horde to defend against. These moments are in each level and are a bit formulaic, but whereas L4D has you start the final battle, here you get some equipment to place to help out – gun turrets, barbed wire, mortar strikes to name a few. It adds an element of strategy.

You’ll need this as whilst most zombies go down fast, there are a few trickier ones. L4D fans will be familiar with the types – there is, in essence, a brute type which grabs people and slams them and takes a massive amount of damage to dispatch. There’s a lunger, a gasser (shoot it and it explodes with toxic gas) and a screamer (attracting other zombies). It adds an element of strategy but this isn’t necessarily anything new. Character abilities, however, do change things up a bit. 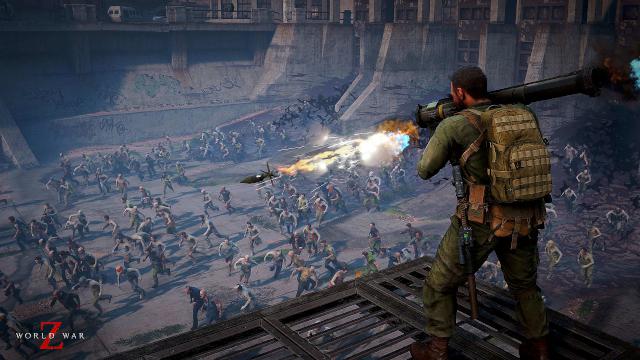 Ideally, you’ll want one of each type in your party – which gives an option on weapons as well as special abilities. The medic obviously, heals faster but weaponry isn’t best suited to crowd control so you’re going to want something with a rate of fire like the Warfighter. I prefer the Fixer, who has a single shot powerful rifle but can drop explosive ammo for the team for added punch. XP earned from playing the game allows you the opportunity to upgrade your weapons and abilities, adding a sort of roguelike flavour to the game. You can repeat a level many times but carrying across XP bought items from previous runs helps you customise it to your liking.

There’s not a huge number of environments in the game but each has multiple parts to play in. New York, Jerusalem, Tokyo and Moscow are on hand and objectives are added to mix things up. One of the later ones involves you having a limited time to find car parts to get a vehicle going to escape before the swarm get you (a massive horde of zombies). This countdown adds tension, and whilst not dissimilar from L4D final battles (even the one with the car) it’s a nice touch and mixes things up.

Whereas L4D had PvP in terms of players becoming the super zombie types, in WWZ PvP is a more classic human vs. human fare. The catch is that zombies are also present on the map and at times will charge through in big hordes. It’s ok, there’s a nice variety of moves but the looseness of the combat is fine (just) for PvE play, vs. humans just feels a little too frustrating. For me, the aim acceleration was just a bit too loose.

The level of detail holds up, with character models and environment looking nicely detailed throughout all modes and frame rate remains steady (on PS Pro at least).

Further good news is that it seems the game has been a surprise hit from a sales perspective, and Saber Interactive have announced a DLC schedule for post-launch support, including new missions, a new zombie type, harder difficulties, new modes, new weapons, variants, character skins and accessories. Phew!

The real downside here though is if you don’t have friends to play with, your longevity might be limited. As with many co-op games, it just isn’t the same when you play with a random set of people. Your experience varies, but it’s best played with some buddies to get the full value – although with it being a lower cost title than the classic AAA releases, you shouldn’t feel too short-changed.