There’s something extremely relaxing about watching a game of snooker. The slow pace, the hushed commentary, the insanely impossible shots that the pros make without even trying… it makes for perfect background TV, so what happens when you try and push it into the foreground and make a whole game around the official snooker championships? Well, it’s not at all bad really.

The most obvious thing you notice about Snooker 19 is the presentation. Numerous official venues are represented, with the cameras set up in such a way that you’ll be forgiven for thinking you’re watching a match at times. Balls are suitably shiny (although nobody’s balls have the same shine as those produced by VooFoo) and carry themselves with satisfying physics, and the sounds of the table and audience are as chilled and realistic as you’d like.

Player animations can be a little up and down though, and the in-game versions aren’t quite as realistic as you might’ve expected given how relatively little there is to process on screen. The commentary is a bit flat too, ignoring your amazing pot where you sent the pink off three cushions into the far corner (and of course that was what you meant to do), and generally keeping a very low profile throughout the games. But other than these gripes things work well, with a clean and easy to understand menu system and professional TV-style overlays throughout each event.

There are a few ways to play too, whether that’s single matches where you pick your player and opponent then go for a normal or 6-ball game, with as many rounds as you choose from the options, or starting a career as a new player, working your way up through the ranks. The game is tough and often unforgiving, even on lower difficulties, and once you’ve lost the table to one of the higher ranked players the chances of winning shrink by the second. It’s realistic to have that situation, but when there’s nothing more than a simple “slightly quicker” button to speed things up, you can be sitting there for a while. A “skip to my turn” option would’ve been nice for quicker games, but then snooker isn’t really a speed games, so maybe I’m expecting too much. 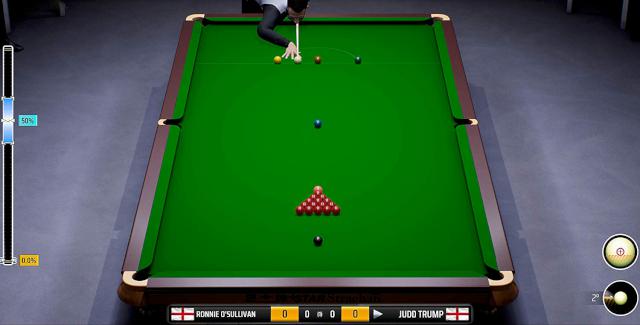 Taking a shot has you lining it up roughly, choosing a more accurate shot from a slightly different angle, then working out your shot strength. All manner of spins, cue angles and positioning are available, leaving you to try and drop the cue ball in just the right spot to make your next shot or screw up your opponent. It takes a huge amount of practice to get it right, but when you hit the sweet spot and manage to chain together a decent break it’s a brilliant feeling. Not one I’ve had too many times, but still…

Local multiplayer is quite nice, letting you enjoy a more relaxed game while sat back on the sofa chatting about stuff. It’s less intense that a lot of other games for obvious reasons, but unless you’re both snooker fans it won’t last long before you look elsewhere for your multiplayer fun. At least you stand a better chance of winning though.

So really, Snooker 19 is a well made game with realistic physics and nice presentation (which you could argue are the most important things in a game like this), let down by awkward player models and a lack of content. There are some odd omissions too like not being able to view a replay of your previous shot for easy saving or uploading, something that screams “obvious” to me, but for someone after a snooker game that offers a big challenge and a reasonable career mode it could well be worth a look, especially at the relatively low price point.