Amicia is out hunting with her father, the senior member of the De Rune household. Very quickly, you discover that A Plague’s Tale is a beautiful looking tale with an interesting story, which is made challenging by the lack of any sort of aim acceleration on console.

Fundamentally, A Plague’s Tale is a stealth (light!) action-adventure game. The introduction sets the scene; whilst out hunting with her father her dog runs away. Finding him, eaten half to bits and swallowed into the ground she heads back with her father. Before you know it, her father and mother are dead, and she is on the run with her brother from a rampaging army, and lots and lots of plague-infested rats.

The brother bit is key. Whilst you play as Amicia, you’ll be accompanied by her younger brother Hugo. Hugo has a mysterious illness which can result in spontaneous headaches. As such, left alone for too long he has a freak-out and will begin to cry – a bit annoying since there is a lot of sneaking in A Plague’s Tale. This is the gameplay hook.

Hugo spends most of his time holding your hand. Understandable. After the death of their parents, Amicia and Hugo try to meet up with people to try and uncover what is happening, why are people getting killed on the way to this force capturing Hugo. Why are rats devouring everything in their way, making people sick or killing them brutally by eating them. Avoidance of these elements are what makes up the stealth as Amicia has a very basic form of defence.

Armed with a slingshot, Amicia can either fire or throw rocks and pots. These acts as diversions or in rare situations, attack methods for the baddies. However, it is not advised as a times this will result in an instant fail – an early boss battle has Amicia devastated at the fact she killed someone. This is not a Lara Croft situation whereby the death is shaken off after an initial shock and them commits genocide. Amicia has to deal with her actions, and the toll that events are taking on Hugo. 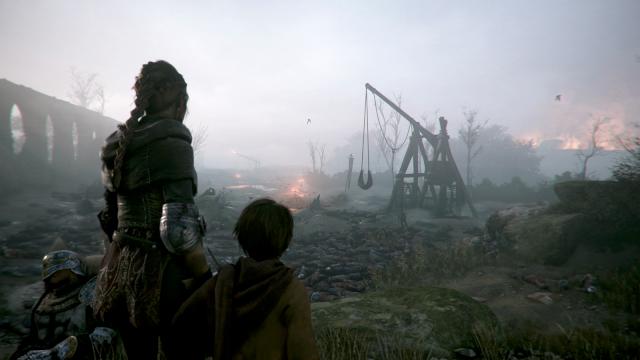 Instead of killing everyone, Amicia mostly uses her slingshot for solving puzzles. Most are distraction based for guards, or by smashing things to open up new routes. Shooting out a chain for example might drop a box you can move and climb on. Shooting out some kindling will allow you to spread fire around (which is a key component in avoiding the rats). This also has the benefit of showing off some very cool lighting effects, and a very cool rat-pack dynamic.

The game looks fantastic and moves wonderfully. Whether it’s bright or dark, it feels like a very rich environment with shadows cast accurately, and spring haze seeping through the woods. It’s no wonder that the publishers are celebrating with an ‘Art of The Plague’ book – it is something to be very proud of. As the rat movement – a huge horde of rats, each one moving individually scurrying about. It’s incredible to see in motion and a terrifying threat.

I mentioned earlier the lack of aim acceleration and it’s a small point to pick up on but it really annoyed me. Moving the camera left or right goes from zero to a hundred in a split second, with the view often darting much further across from what I wanted. This is made significantly worse in shooting sections, where despite a generous auto-aim, you can zoom right over where you are trying to aim to, and it becomes frustrating. This is most noticeable in the aforementioned boss fight where you quickly need to shoot off a foe’s armour in order to take him down. Running away, quickly turning the camera and aiming is annoying, and it took me way more attempts than it should have.

Thankfully, you don’t need to look at Hugo to command him. ‘Stay’ and ‘follow’ are as advanced as it gets with him, although aside from a few sections he did a reasonable job and didn’t cock things up for me. There are some classic “I’ll lift you up here and then unlock the door for me” moments but generally it works fine and is strengthened by the quality of the writing which evolves the partnership between the two.

There are a number of collectibles about if that’s your bag but it’s a very linear story-driven stealth experience, and if you are interested in heavily story-driven games then it would be worth giving The Plague a shot.