Neptune has lost her memories. You play as her, and must help her regain them whilst completing quests for the locals. Another standard RPG then? Well, yes. But what sets Super Neptunia apart is that it’s very aware if the common tropes of videogames and RPGs. Let me explain.

As you awake, sans memories, you discover you are in the world of the, I mean, of Gamindustri. And everything is 2D, so you need to pay the 2D tax. Yep, Super Neptunia is very heavily self-referential. Early on you encounter an NPC, where Neptunia is surprised to hear they have something of merit to say and she exclaims “Oh, I thought you were just another NPC”.

I found myself smiling a lot very early on, and had to refocus on actually playing the game as instead I was taking screenshots of every funny moment I came across – and there are a lot. As you begin to explore the world you learn that not everything is at it seems. Your job as a 2D tax collector of the 2D world only reveals to you that the organisation you now work for has more of an interest in 2D cartridges than actual money…

In the world, you navigate in the form of a 2D side-scroller. Movement isn’t fluid though, and although the backgrounds are nicely hand painted, you float through them. This is made to feel worse by the jumping about, which is really odd (although improves through the game as you get more used to it and collect a few different abilities.

The world is split up into screens and where there are enemies roaming, simply encountering them leads to an automatic battle. What you can’t see, sadly, is how many enemies you will fight. For example, a lone wolf would make an easy target, but engaging it can result in an outnumbered situation whereby you are more at risk of dying. 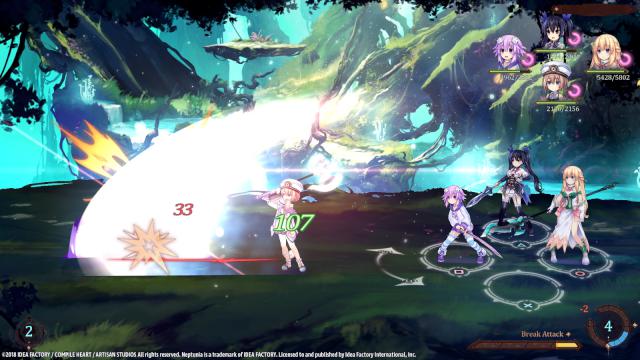 The battles themselves look like standard turn based RPG stuff, but aren’t. Of course, there are numerous stats and weapons, skills and abilities to unlock (or learn to use forever) but when it comes to fighting it’s more of a game of timing. You can have up to four members of your party, each one represented by a face button on your controller. Over time, your Battle Points (BP) increase, and each move costs an amount of BP. Therefore there is a wait between when to attack, who to attack and when to chain. It’s a good system, but over time it becomes a bit tiresome and feels like it lacks variety.

Each enemy also has a strength or weakness against a different element. An enemy weak to fire for example, attacked by fire will reward you bonus BP – meaning you can more quickly chain together various attacks. This element of strategy is welcomed, but still doesn’t result in much more than you tapping face buttons by watching a numbered bar tick up.

Over time, I felt like I became more invested in Super Neptunia, but it actually started to bore me once I hit that point. I needed the story to accelerate quicker than it does, and needless (and seemingly endless) quests with minor benefit felt like padding whereas I really just wanted to quick line through the story. The initial humour as well becomes a bit worn, a joke used over and over which does become a bit of a shame.

The art style is good, and the humour is light throughout but I think unless you’re a die hard Super Neptunia or RPG fan, your mileage is probably going to be quite limited with this.