Just as the F1 games from Codemasters were starting to get agonisingly close to the real thing, something went wrong. The good news is F1 2019 (the game) is every bit as brilliant as you might like; unfortunately in the meantime the real thing has become incredibly dull, to the point that the latest F1 title is actually far better and more enjoyable than the sport it’s based on. An average Sunday afternoon might have you spending two hours watching Mercedes buggering off into the distance, while a train of slower cars meanders round a track, unable to overtake and getting penalties whenever something interesting happens. But now, thanks to Codemasters and their lovely earlier-than-usual release date, you can forget all about that, jump into your favourite car in the game and have hours of wheel-to-wheel excitement, just the way you’d hope the real thing would be.

Let’s get some obvious things out of the way first – there’s a lot in F1 2019 that was also in last year’s version. The same game modes are in place, and the classic cars are still knocked into the career mode through some fairly random and unlikely invitational events between proper races. There’s still online options, and the time trial mode to let you get to grips with as track or just try to beat your friends. But scratch beneath the surface and you’ll find a few new little things tucked away – not much that’ll make you scream and dance around like a lunatic, but enough to make this another very decent evolution on a previously excellent formula. 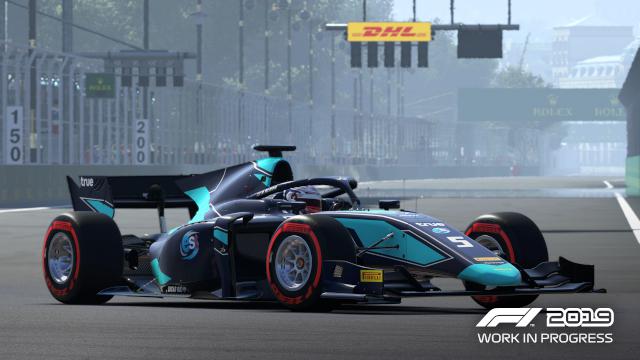 The biggest addition that was hyped up before the game’s release was the new introduction of F2 races. And sure enough, when you start your career you’ll choose which F2 team you want to be drafted into. Not that it makes a huge difference, because in an unfortunate twist you don’t race the whole F2 season, but instead get three short scenario based races to try out with the idea of building the start of your racing story. And a story it is; like some of the TOCA games of old, cut scenes and race-day decisions help to kick off a story of rivalry between you, your teammate and an opposing driver, which bubbles into F1 on your promotion into the big time alongside these other two drivers. It’s all exciting stuff, right up until you realise the story has stopped quite quickly after starting F1, and these rivals fizzle into the background, only occasionally cropping up when you’re racing them on the track, and even then it’s only your own mental notes that turn those battles into something more meaningful.

It’s a shame really, and quite the missed opportunity given that other drivers will move between teams – it could’ve built into a 10 year battle of progression from back-of-the-grid newbies right up to championship battles in the top teams a few years later. Maybe that’ll come later, after all the basics are in place now so just need to be built up into something slightly meatier. But everything else that’s cool about the career is in place: the practice sessions to earn research points (which can now be simulated while still letting you earn points, which is all kinds of awesome), the upgrade tree, the rivalries between drivers and the varying degrees of pressure depending on which team you sign for. Media interaction is still good too, letting you answer questions in various ways which will have an impact on how various teams (including your own) see you.

Online racing is solid, and while I was playing against other pre-release media types and the servers weren’t exactly under much stress the games were reliable, lag-free and allowed me to focus on the racing and not whether the player in front was about to lag on top of my car and end my race. I can screw up my own races, after all. A very welcome part of online racing is the scale of how clean your racing is, allowing you to be dropped into races with other drivers who like to race without contact (or vice versa if that’s your bag), much like GRiD and Gran Turismo managed pretty well. But there are a couple of new online modes which really stand out as being worth a look. Online Leagues let you set up a calendar of events for you and your friends (or random people if you want to leave it open) giving you the chance to organise races each week and keep track of your own championships. Pretty neat. There’s also the new Weekly Event GPs, whereby you have a few days to practice and set a qualifying time, then at the end of the week get to race against others who are of a similar skill level, almost guaranteeing close racing and exciting battles. All of this earns you currency to spend on various customisation options for your helmet, suit and actual car, all of which are shown when racing online. All good. 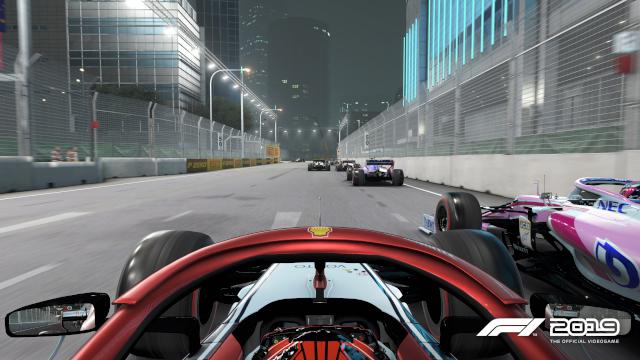 But even if you just want to race against the AI, you’ll have fun. The competing racers on the track are unnervingly realistic at times, changing their lines to try and block an overtake, squeezing you across into a far from ideal line into a corner, or fighting back in any way they can when you eventually get ahead. Spend some time to find the right difficulty setting (it can take a while to find the sweet spot between impossible and walk-in-the-park) and you’ll be handsomely rewarded.

So is F1 2019 a big leap from last year’s game? No. Is it worth getting if you got last year’s game? In my opinion, yes. Not just for the newer car shapes, liveries and drivers but also for the F2, the new online options, the more aggressive AI and the general feel of tighter handling and better racing. I’d have loved to see more of the career story, but what’s there is fantastic and you’ll be hard pushed to find a more satisfying racer released this year.