As online gaming gets more and more serious, so too does the need for good quality hardware in your gaming setup. What good is your beautiful sparkling PS4 Pro, or your new £800 graphics card, if you can’t taunt, tease and communicate with your team or opponents during a heated game of something? A decent headset is a tricky thing to find, down to the fact that while hardware manufacturers have managed to produce some bewilderingly high quality headphones, the microphones on them don’t really do them justice.

Step forward HyperX, with the QuadCast microphone, a standalone mic which will hook up to anything with a USB port available and do an incredible job of pretty much whatever you fling at it.

The first and most obvious thing you’ll notice is how awesome this mic looks. Donning the HyperX red, it lights up from within when it’s plugged in and live, giving you (and anyone else within range) a clear indication that it’s fired up and ready to roll. Muting the mic is as simple as a quick tap on the touch-sensitive top part of the microphone, meaning a simple gentle nudge will switch the mic on and off without fiddling around looking for a switch. This has two big benefits: firstly, it’s easy. You can take your hand off your controller, keyboard, wheel, whatever for a fraction of a second and you’ve muted or unmuted the mic. Easy. But also it means you don’t send a mechanical thunk sound through the ether from a physical switch being pressed, so generally people won’t notice you’ve muted yourself, which is a nice touch. 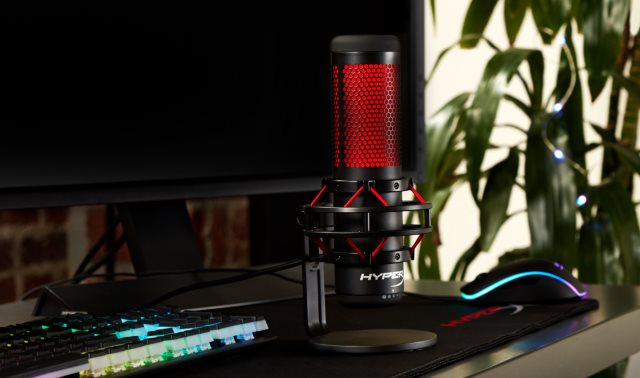 Set up is as easy as plugging it into a USB port, but there are a few options that are worth playing around with. The smooth-turning gain dial at the bottom of the mic allows you to play around with how much your voice is picked up and beefed up, and that’s worth doing once it’s in situ – there’s a fine line between being too loud and too quiet, so a bit of experimenting with the position and gain is time well spent.

But there’s also a firmer four-way switch at the back which lets you switch between stereo, omnidirectional, cardioid, and bidirectional modes. If you’re using the mic to record a podcast around a table with others, or recording your latest role-playing session, the omnidirectional mode is great and will grab any sounds made from any direction. Cardioid is the way forward if you’re on your own, giving tremendous focus to your voice and doing a very admirable job of cancelling out background noise, handy if you can’t guarantee being locked in a silent, sound-proofed room each time you’re likely to be speaking. Each mode has its uses, but it’s these two I suspect most people will switch between, and that’s assuming for a moment you won’t just keep it on cardioid mode for the entire time. It can, if I’m honest, be a bit of a git to set up and get fully right, but that’s probably the case for all standalone microphones so I won’t knock off too many marks for that.

This is all very well and good, but what of the sound itself? Unsurprisingly the sound from the QuadCast is fantastic, giving some good bass reproduction as well as keeping hiss to a minimum and giving a balanced, accurate sound. The difference between this and a microphone in a headset, even those used by HyperX themselves in the excellent Cloud Alpha headset, is astonishing. If you think your headset’s microphone is giving people a nice clear representation of what you’re saying, this will blow you away. Of course in general gaming you’re not the person who’ll be benefiting from this increase in quality, but your teammates will appreciate the difference, and any recording you do for video voiceovers, how-to videos or podcasting will be far, far more professional sounding. 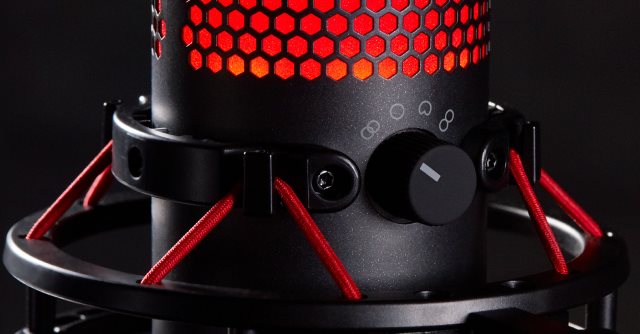 But there’s one other little feature that makes the QuadCast stand out: the built-in shock mount. For those unaware, a shock mount is designed to suspend the microphone away from the actual stand itself, greatly reducing the impact of anyone knocking the table or bumping against the microphone’s housing gently. Usually you’d hear the thud through the microphone, but unless you knock the mic itself (still possible, obviously) you’re far less likely to hear the disturbance thanks to the microphone being held in mid-air by some vibration-dampening elastic – you can see the red string-like parts in the images on this page.

So. Is the HyperX QuadCast going to let you set up your own professional radio station? No. But will it allow you to unplug your headset microphone or let you give yourself a far more life-like voice recording for your various gaming projects? Oh yes. Most definitely. This is a fantastic quality microphone which, while a little pricey, won’t break the bank and will look all kinds of awesome sat on your desk along with your other HyperX gear. Very, very easy to very strongly recommend.