Imagine that the Nazis weren’t defeated in World War 2. They’ve been thriving, it’s 1980 and their butts are needing to be kicked. Without having played the previous games, the introduction does a reasonable job of filling you in.

B.J. Blazkowicz was a soldier who killed a lot of Nazis. He has two daughters, and although his Nazi-killing days are done, theirs are just beginning. A training regime at home has them practicing combat by hand-to-hand training and shooting. Special suits enhance their abilities and they come in two colours and have stupid helmets that look like Pyramidhead out of Silent Hill. Can they live up to their father’s name in the Nazi-killing stakes?

This sounds ridiculous and obviously it is. Picking a character and ‘building’ them gives you the option to change appearance slightly (for the benefit of your co-op partner only since this is FPS) and choosing if you want to be a more stealthy or smash-mouth style. This is stealth by Wolfenstein standards however so the term is used in context – you will be causing a lot of carnage.

The bare bones of this then, are brilliant. You move fast, you shoot, stuff blows up. Enemies fall apart – sometimes literally – and blood goes everywhere. Run, jump, shoot, explode. It’s smooth, it’s fast, it feels good and sounds great. Levels are fairly open, or certainly feel it at least, giving you a good feeling of exploration without forcing you to get lost.

The world is built in such a way that it feels great to be in too. Not just the level architecture, but the details surrounding it. What would happen if the Nazi’s culture developed to include pop songs and a distinctive 80s decor? It’s fun to run around him, and abilities such as double jumping allow a verticality that doesn’t feel overwhelming. 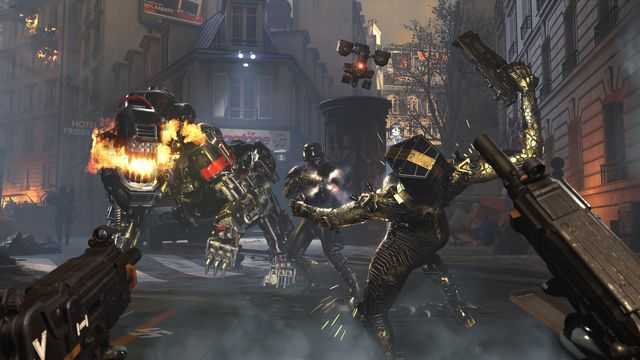 I mentioned co-op earlier, and that’s because the sisters are the stars here. There are two of them, which means either an AI or real-world buddy is going to be helping you out. This means you get both a dynamic between how they interact, and co-op specific actions. The bad news, is that both of these are terrible.

So it’s subjective, but the teenage girls are really dumb. Like, really dumb. They’re annoying, and even though you need to suspend disbelief a little (it is a video game after all) it’s kind of weird how they’ve never killed anyone before, and they suddenly go on a massive killing rampage after a very short shell shock. This isn’t a problem unique to Wolfenstein but it could have been easily avoided. Their first kill has them stabbing to death a Nazi, celebrating then puking. Ten seconds later they are blowing limbs and heads off people without flinching. The joking around anytime there is a break in the action is frustrating.

The co-op actions aren’t terrible on their own. But there are a lot of them. Another niggle I have is that everything in the world needs to be collected. This is a pet peeve of mine, but if I see a table containing a gun, ammo, and some currency, let me just run over it to pick it up (assuming it doesn’t replace an existing weapon). Having to select every one breaks the pace, and when you’re waiting for your partner in order to trigger the next scene, well, it’s a test of your friendship.

Currency allows you to upgrade weapons, and unlock skills. This RPG-lite system works to a degree but does feel like they’ve shoehorned the live game approach of Destiny or Division into this. Enemies have levels and energy bars, and it helps give a feel for how likely they are to kill you, but you’re constantly worrying about what skill to unlock or upgrade, and weapons to boost. This is at odds with the pace of the game really and we became bored after a few hours of co-op play of worrying about upgrades and stopping for co-op actions whereas the strength of the game – the balls to the wall shooting – is given a backseat to this at points.

The underlying package is decent, but it feels like a bit too much has been shoehorned in to really succeed here. Maybe if it all clicked then it would be fine, but it doesn’t, and whilst not terrible, the end result feels a bit like a whiffed opportunity.