It’s weird to think that the Madden series of games has been in my life longer than any of my friends, colleagues or anything else outside of my immediate family. Since 1991 I’ve been enjoying the action, seeing how each game has improved or changed year on year and almost always wondering when they were going to bring back the crazy ambulance drivers who ploughed through other players on their way to picking up an injured quarterback. Now, 28 years later, there’s yet another iteration of the only American Football game worth playing, and while there are only a handful of different game modes the action remains as tight and enjoyable as you might hope.

The first thing that the game pushed me towards was the QB1 mode, a replacement for the Longshot story-driven mode from the last couple of games. Here you create a player and pick a college team to join for the last couple of games of a championship drive, and as a previously-promising quarterback who’s been largely forgotten for a few years need to take your opportunity to enter the full NFL draft and join a pro team. There’s some nice dialogue choices to make along the way which sound like they’d affect the outcome, but without playing through it a few more times it’s hard to see just how things would have been different. But it gives your playthrough a feel of individuality, especially as you’ll probably find yourself in different teams as your friends playing the same mode. Beyond this, it’s a case of building up your place in the team and proving yourself to the coach by completing objectives, improving your stats and generally being a badass on the field. Something which, incidentally, is helped by Madden 20’s other big new feature: the X-Factor system.

Totally unrelated to the ever-yawnsome reality squeeling show on TV, Madden’s X-Factor mode picks out the key skills from the NFL’s best players by giving them boosts when certain objectives have been met. It might be to make defensive players burst through offensive lines as if they weren’t there, or give a quarterback pinpoint-perfect accuracy or additional throw distance. Players that are in the zone get an X icon above them on the field, and whether you’re facing off against them or benefiting from them being on your team the difference these boosts make can be dramatic and turn the tide of a finely balanced game. These boosts aren’t permanent – throw an interception, drop a pass, or otherwise hit your failure conditions and you’ll be back to Joe Normal – so making the most of them while they’re active could make all the difference between a win or loss. 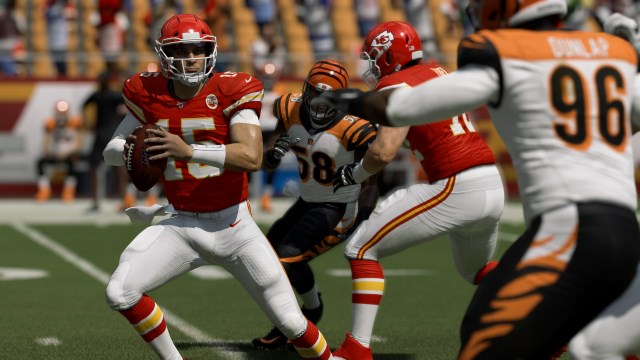 Elsewhere the Franchise mode is still knocking around, but it’s starting to show its age and feel a little unloved – it’s fair to say that a bit of a reinvention wouldn’t go amiss, and when compared to the equivalent modes in the FIFA games it’s just not quite up to scratch. It’s fine, and will still be great for those who haven’t visited the Madden games for a few years, but you’ve seen most of it before if you’ve spent much time with it over the past couple of years.

The Ultimate Team has seen a few small changes again to make things a little more accessible and fun, although as this was given a big lease of life last year the smaller changes this year are more evolutionary than revolutionary. Missions and Ultimate Challenges will keep you busy as you build your squad through the usual methods of buying and collecting players. Ultimate Challenges are probably the most interesting, letting you pick your own difficulty with varying levels of rewards – naturally if you succeed at a three-star challenge you’ll be getting some much better results than sticking to the much easier single star options. It gives a few new ways to build yourself towards the bigger players, and while you’ll either need big chunks of time or money to get your squad up to the upper echelons of Ultimate Team greatness, there’s still plenty of fun and addiction to be had without needing to empty your bank account for a few new X-Factor players.

But the most important part of this, really, is the fact that the action on the field feels brilliant. It’s not a huge leap over last year’s version, and if you’ve got Madden 19 it’s questionable whether or not you’ll get a great deal more out of this, but if you’ve been away for anything more than a couple of years and want to get back onto the Madden train then this will serve you very well indeed. There’s plenty to look at for next year’s game (because let’s face it, it’ll be a cold day in hell before EA choose to knock the Madden series on the head) but for the next 12 months this is going to be an American Football game to keep you buzzing as the actual NFL season arrives.