The main premise of the story is that humans have made a total mess of Earth, and need somewhere else to go. So far, so believable. After making a bit of a hash of the landing you crash into the planet’s surface and wake up next to a bonfire, with only a seemingly friendly robot to keep you company. A robot who seems to be able to make an endless supply of marshmallows. As the story pans out you interact with the various thing you find around you, be that logs to stoke the fire, eating or toasting the marshmallows or pressing options on the robot’s chest. There are a few other little surprises that crop up as well, but that’s not really for me to spoil. Interacting with the items is easy with the Move controllers, and tracks nicely as well to ease any frustrations, meaning you can grab stuff from any distance, throw things around and generally have a bit of fun. 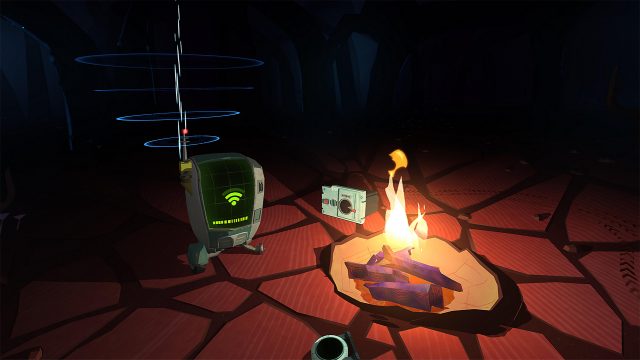 It’s a nice story, one which gives you a fascinating moral dilemma at the end which opens up two different possible outcomes, and flows at a really nice pace to be finished in about half an hour. That sounds quite short, and I guess it is, but it works. I didn’t feel short-changed when I’d finished, and was more than happy to dip back in a day or two later to try a few things out and see the alternative ending. You won’t be screaming the house down like a session on Resident Evil 7, nor will you work up a sweat like a heavy game of Beat Sabre, but you’ll smile, and you’ll feel good by the end.

And aside from that, there isn’t really much else I can say without ruining a few surprises for you. Essentially the important news is that Bonfire is a very enjoyable experience, one which any PSVR player will be able to enjoy, and definitely a great option for introducing someone new to VR without that usual newbie motion sickness. As an added bonus it’s a very achievable platinum trophy as well, so if that kind of thing matters, or if you just like the sound of being a leading part of a story as it unfolds around you, head to the store and grab this right away.