Want to learn how to drive? I’ll give you some tips says Peter. You can call him Pete. You learn how to drive forward, reverse park. Pretty simple. What’s that? You’re starting your own construction business? But you just learned how to drive. Never mind, says Pete. I’ll come work for you!

Pete’s blind optimism was misplaced as on my first job, I drove a backhoe excavator through my clients house. But, everyone has to start somewhere. And that’s the premise of Construction Simulator 2.

You’d be forgiven for thinking this all sounds a bit boring. But these boring sounding games have carved out their own niche in gaming today, with a ‘simulator’ of any sort of job you can possibly imagine.  Construction at least has some variety and this is evident as you begin your company looking for work.

It wouldn’t be a simulation without mirroring the real world, and like the real world, Construction Simulator 2 is ‘open world’. You can go anywhere, within reason – the map is open and consistent did various areas each containing a headquarters which you can upgrade. You do this by completing jobs, and they vary by a wide variety of types and vehicles. Any sort of construction you can imagine is involved, from the aforementioned garden excavation to full on highway repairs. The interest comes from the actual ‘work’ which is a game in itself.

It was this point that I began to wrestle with the controls. The tutorial does a decent job of showing you how it works, but when you come to do (for example, the first) task, you realise you’re left standing there with your tools in your hands. All the gear and no idea. Example: the backhoe. Left stick moves the first bit of the crane thing (technical term). The right stick is camera. However, hitting the function button turns the right stick in the second part of the crane thing. You need to use these together which so challenging using the joy cons and having to switch back and forth out of function to get the camera to move. 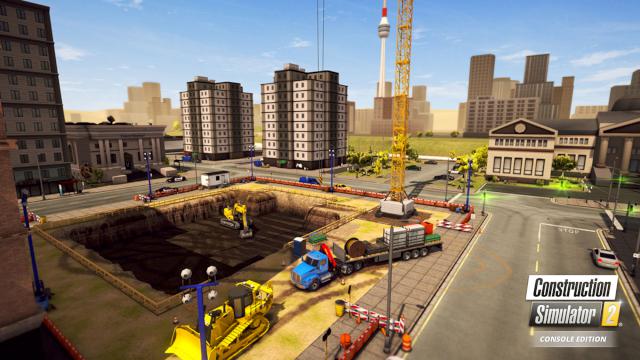 Eventually you get the hang of it, but I never felt the controls were as intuitive as they could be. Sure, it’s not meant to be easy. But still, there’s simulation, there’s ‘game’ and there’s fun. These things should not be exclusive.

Another example where reality takes over fun is in the driving. Driving is fun. Running red lighted results in an instant penalty. I’m ok with this. However, speeding (and inability to slow quickly) means you can inadvertently collect fines. Avoidable? Yes. But without analogue triggers on the Switch, your acceleration goes from zero to dangerous and nothing in between. This makes trying to stay on the speed limit an exercise in frustration. Try driving to work tomorrow using either foot to the floor throttle or no throttle. Let me know how you get on (when you get out of prison or hospital).

RPG elements round out the experience as you upgrade various elements of your ability the more you play. It’s light, but a nice touch. Surprisingly it also looks reasonable. It’s actually a mobile port which explains the decent performance, but I was expecting a horror show and it did not appear that horrendous, so that’s a win.

What did I expect from Construction Simulator 2? Well, I’m not sure. I thought it would be awful. Good news, it isn’t. It’s quite fun. And a decent representation of handling lots of construction jobs. It’s nice to have in Switch convenience and it’s something a bit different. In summary then, whilst not exactly breakneck pace, it’s decent fun. Now if you’ll excuse me, time to go and rebuild the house I knocked down. Again.