‘The Official Video Game’ – who even calls their game that any more? Well, the Monster Energy folks, sponsors of supercross racing do. Milestone, the developers are knocking out one motocross and one supercross game a year at the moment and whilst the latest motocross (or MX) game was not that great vs. previous years, the supercross one (this one) is excellent.

So, supercross, motocross. What’s the difference? In essence, MX games are on outside tracks, supercross games are on stadium tracks. Typically, the supercross ones are narrower, and tighter, as a result, more of a focus is put upon the ‘rhythm’ – that is making sure you launch off one jump and spend as little time in the air as possible, before handing perfectly on the downside of another jump and carrying on.

This was my initial shock. I play all of these games every year and for the most part, I enjoy them. However, I found this really hard. A ‘racing line’ shows you the jumps to take, but I just could not get it right. I figured, guess I have to do the tutorial. Turns out, I was doing the tutorial. The tutorial sucks.

The first thing you do in the game is the tutorial it turns out. It tells you how to start. Then you just race. It has basic controls on the screen, and it tells you literally nothing. Actually, the controls are basically the same as the previous games, so you need to shift your riders’ weight to ‘seat bounce’ and get over jumps, however for some reason I’d sort of forgot this. The tutorial does not mention this. At all.

So, with my bouncing all in play, I’m still finding it really hard. Maybe it wasn’t that? After some practice and learning the tracks a bit, I’m back in play. The learning curve here is definitely higher than on previous games which on the ‘very easy’ mode I quickly if not immediately blitzed all of my opponents. Not so here; if you get the rhythm wrong, you pay for it. Big time. Landing on another jump is a tough day at the office, and you learn the hard way.

Every year, Milestone make some tweaks to the handling of these games. Sometimes they’re winners, sometimes less so. Here, they have moved toward a more realistic handling model for the SX games, which typically have been more arcadey. So weight control in the air is more important now, and getting the right launch direction is too – you can’t ‘steer’ in the air any more like you could previous SX games. This is a good move, yet with greater physics comes great responsibility, and you have to be prepared for the occasional freak-out. 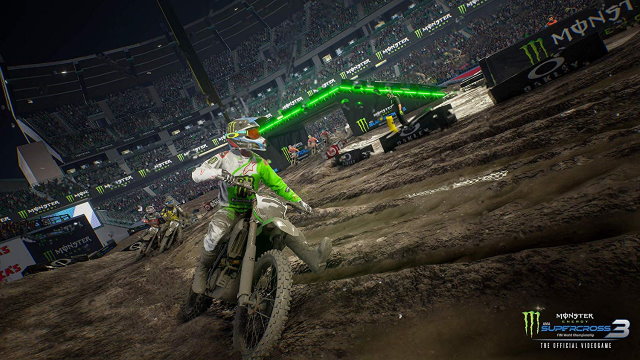 On a few occasions, I’ve had some very odd bounces. The bike with buckle and flip in very odd ways, but for the most part, these aren’t that often. The sensitivity of the steering has also always been a challenge for newcomers to the series, and it is punishing here too. It’s very easy to oversteer and clip one of the boundary markers which causes you an instant dismount. With time, this gets easier, but this is very much not a beginner-friendly game.

There are a lot of options though – the usual championship and career modes are on offer, as well as an intensive create-a-track option and the ability to play online (as well as created tracks). Dedicated servers are touted as being available for better online play but at time of writing, there aren’t many folks online yet – the few games I’ve had have seemed fine, but I’ve been schooled so it’s hard to judge the net code from miles at the back. Customisation options are in play too for bike and rider, confusingly some of the bike ones have a stat impact too – which is fairly well hidden. Contracts for teams and sponsors also have a nice edge for career play, with different goals (and outfits) available as a result.

There is a challenge mode too, enabling you to be tested on some of the more intricate elements of riding. This (and the entire game to be fair) suffers from a really underwhelming and barebones front end, that it feels like a bit of a temporary menu system surrounding the game. It’s not a huge deal, and hardly a game breaker but there are some really nice graphical touches in the game, the polish surrounding it is a bit lacking. But, better it looks good while you’re playing the game than navigating the menus before playing it.

The racing, as mentioned, looks decent. Shirts bluster as you’re riding, ruts appear in the track (although I’m not convinced that this helps you get round the track once the ruts are laid down after a lap). The noise is excellent, but frustratingly as I looked at some videos online (to figure out why I was so poor at it) I saw a lot of PC footage which looks next level compared to the PS Pro version. The frame rate seems reasonable but hard to tell exactly what it runs at, as it all looks a bit muddy. Not ‘muddy’ as in you’re riding on mud, but ‘muddy’ as in how N64 games used to look to mask performance. There are a lot of riders on screen and it never stutters, but knowing there’s a much prettier version out there is a bit sad.

There’s a lot of game here and if you’re into bike racing and want a challenge, I think this is a really good option. Given an older version was free on PS Plus recently, I think that could make this a bit of a harder sell, but with more tracks and options on hand, it’s worth a look.