7th Sector is a difficult game to describe really without it sounding very simple, although in reality it is. It’s atmospheric and starts as you look over some cabling, set before a dystopian backdrop. Interesting location, but this isn’t really what you’re playing. Your playground, is the cables.

Your response is probably similar to mine; “Is this it?” Pretty much. But that’s a little unfair. At its heart, Sector 7 is a puzzle game. You are dropped in without any explanation, with your only measure of success being by exploration to open up new levels. How you do this, is by traversing wires. Traversing you say, but how? Well, you are a little bolt of… electricity.

You simply move backwards and forwards, and when you get close to another wire, you can ‘jump’ to it. On the way you have to avoid other bolts which act as enemies and force you to respawn, and jumping to wires or speeding up are your main weapons in managing this. What makes it challenging is the puzzle element. 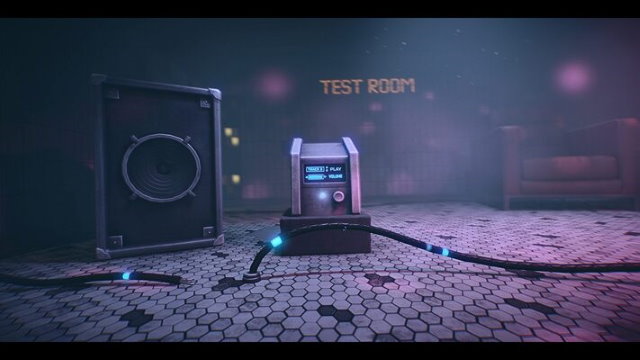 At points you’ll need to reach monitors which offer clues on how to progress. These might be codes which you need to unlock doors, or access areas which give hints about where to go to progress through the game. There are a fair few agility bits too, requiring careful balance of speeding up and slowing down then jumping to avoid enemies. Sadly, this isn’t classic platform stuff, and rather an exercise in frustration or trial and error as you learn the hard way what you have to do. There’s a delicate balance needed in these types of games, and 7th Sector asks for more patience and teeth-grit than is appreciated. It’s not like you ever know what to do and just can’t quite do it, rather that it’s not always clear until you keep killing yourself in different ways to realise there’s a new bit of scenery you can jump to.

The background environment does have a part to play in the adventure aside from the odd clue. Sometimes you’ll do things which make elements trigger, for example, turning off the lights and watching some people (presumably up to nefarious deeds) react and maybe go through to another room, leaving a path open for you. There is some nice interaction here and it helps the cyberpunk dystopia really shine.

The lack of tutorial and fairly limited gameplay makes it a tough one to recommend. Those after atmospheric adventure puzzle games may find interest in it however, and for that reason alone I’d say it’s worth a look. But you’ll need some patience.