I’m deep into the 1890s, and knee-deep in a swamp which houses, somewhere in the moonlit gloom, a weird swamp-beast that’ll start chasing me under the water any moment and scare the living daylights out of me. If I survive that I’ve still got to get myself to the biggest beast in the map – an assassin, huge spider or obscenely big dude called The Butcher – and polish them off. But I’m not done there, no sir. All I’ve done now is initiated a ritual that will take a couple of minutes and light me and my partner up on the map like a beacon of Gondor. Now everyone else on the map knows where I am, knows where the magic token will drop, and will be hunting me down like a rabid dog who’s stolen someone’s hot dog. And I still haven’t even thought about my extraction from the map…

This is Hunt Showdown, one of the most atmospheric and downright tense games I’ve ever had the enjoyment of playing.

Played in mini-teams of two or three, you and some other teams (made up of real players) need to find the main boss-style bad guy in one of the two available maps on offer, grab a token which gets dropped after the two minute ritual and escape from the map without getting killed to death. Trying to bring you to your demise is not only the humans scattered around the map (which gives a really tense PvP element) but also various AI enemies as well. These zombie-style enemies range in style, from simple and slightly rubbish one-shot-kill walking blobs of useless, up to weird eels, ravenous dogs and huge lumbering beasts that are tough to kill and worth avoiding unless you’ve got something that’ll set him on fire.

So among all the chaos of trying to keep track of the other humans, as well as trying to fend your way through the AI monsters without letting the world know where you are (keep those gunshots to a minimum, folks) you’re looking for clues which will guide you to the location of the final boss enemy. Once all of the clues have been found, you’re guided to the boss’ lair through your special vision which lets you see trails, clues and occasionally enemies. The coordination of the team is paramount here; do you stick together and fight off the bad guys by yourself, or split up and each find a clue to try and catch the other teams off-guard? The latter option is the fastest route to the end goal, and believe me when it happens to you there’s a real “WTF” moment when you realise another team has already killed the big enemy after 3 minutes, but it’s also risky. If one player fails in finding their clue, the whole team are scuppered. Not only that, you can revive downed teammates if you’re next to them. Spread out around the map for speed, and you’re sacrificing safety.

And safety counts. Once your chartacter reaches level 10 (which it will, quite quickly) you’re into permadeath mode. The bane of every XCOM player’s life, this means that once your character gets killed in a game they’re dead. Gone. Kapput, along with any weapons you might have unlocked for them along the way as well. You get a new character, with a new identity, a new look, and the basic weapons. The stakes are high, and the higher you get the more nail-biting the games get. You need to get the kills and the extractions, otherwise you don’t make progress. But everyone’s in the same boat, and not everyone will make it out alive. 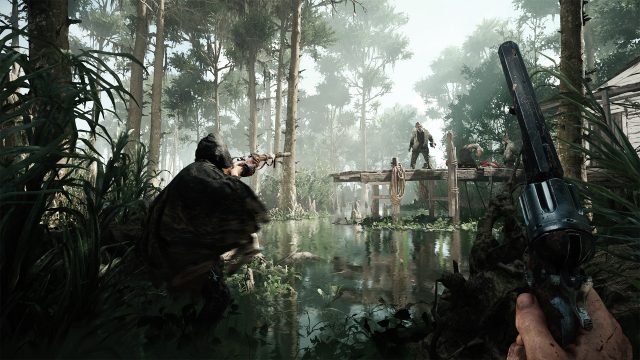 The game looks very decent, with great looking enemies and some truly horrifying bosses to deal with. Seriously, the spider alone is the stuff of nightmares. But there’s one element to Hunt Showdown that I feel is head and shoulders above a lot of other games, and that’s the sound design. Between the distant echoes of opponent’s gunfire, to the horses that bolt when you get too close or the flock of birds that scatter as you run through them. Every sound you make, every bit of nature you disturb, all makes a sound that can be picked up by your opponents. Fire up a decent headset and you’ve got a crystal clear idea of what’s going on around you, where your teammates are and where the enemies are coming from. It’s brilliant, and make the game far more than it might’ve been had less thought been put into this particular area.

So, it’s all good then? Well, mostly. The game itself is great, but only having two maps is a bit measly, and while they look fantastic with sunlight streaming through trees and water sparkling as you wade through it they’re likely to get tired before too long. But my biggest issue is the interface of the various menus. It’s so hard to work out where things are, or what you can do, or what the various currencies are for. You could play for hours and still get lost. I’m fairly sure a bit of TLC could’ve worked wonders here.

But let’s focus on one thing here: Hunt Showdown is one of the most atmospheric, emotionally crippling games you’re going to find. it’s great with a friend or two, gets the pulse up to levels that a game shouldn’t be capable of, and delivers it all in a very attractive and fantastic sounding package. Definitely worth a look.