If you’ve ever played ‘Where’s Wally?’ then you’ll know what you expect with Hidden Through Time. You are presented with a detailed world of characters and intricate colours, and have to find things. Simple!

The key difference between this and the famous Wally books, is that there is no central character that you’re trying to find in each level. This is kind of a shame as you’ve got no central anchor point, instead you have an increasing amount of objects to find in increasingly larger and more complicated levels.

Characters are simply drawn, with just enough detail to be able to tell specific ones apart – at least the specific ones you are looking for. The game begins early on in the prehistoric ages fitting on a single screen. After a few levels you will have to do a lot of moving and zooming around to try and find the objects you are looking for. It’s never completely as simple as that though – early on you need to find an arrow, to which I was convinced that it did not exist in that level. Shamefully, with the help of a guide I found it stuck in a tree. Hardly seemed fair! 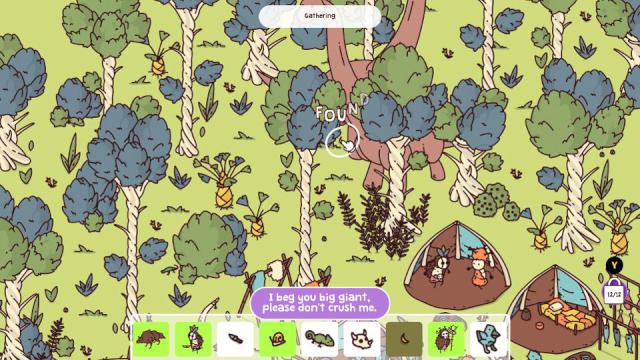 Thankfully, you only need a certain number of objects to pass each level but there are further challenges. Each level has a degree of animation – characters walking around for example which can make it harder to work out where you’ve been. The classic Wally strategy of tracing your finger over the book won’t work on the TV screen – well it might but at the expense of fingerprints on your set! There’s also a layer of interaction needed – can’t find a character? Maybe they’re in a tent. Click the tent to open it. There are some sculptures being build in the third or fourth level which by clicking on them repeatedly, you break bits off and break them down to reveal an object behind.

It’s a nice game, and if you’re after a hidden puzzle game then this does that very well. It has a nice visual style, the levels are brilliantly complex. It lacks some of the humour that could be found in the Wally books but there are glimpses. Unless you wanted a hidden puzzle interactive game though, I’m not sure this is going to surprise anyone wanting balls-to-the-wall action.