An anime fighting game called Under Night In-Birth Exe:Late (cl-r) is never going to be a mainstream household name and join the likes of Mortal Kombat and Tekken in crossing over to a broader casual audience. But in more dedicated fighting game circles, the Under Night In-Birth series has been a slow burning success story since it was first released on PS3 6 years ago. Different versions, steady updates and more letters in the name have arrived during that time, and in summer 2019, UNEL finally arrived as one of the 9 fighting games featured at Evo 2019, the biggest fighting game tournament in the world. This provided the title with wide spread exposure to a receptive audience, and was where this version of the game was announced. New moves, balance adjustments and an all important new character are included in what is the most complete version so far. So as this may be the first version that many people will be exploring, let’s look at where this game has arrived at, 6 years into its lifespan.

Firstly, (cl-r) looks great, as all Arc System games tend to. Characters are beautifully drawn and animated, with a rich variety of character and personality types. The stages are attractive yet unobtrusive, and provide a variety of atmospheres without being distracting. Menus, character screens, and pre and post fight screens are all full of care and attention and ooze with the quality of presentation we’ve come to expect from Arc Systems recent games. The lore and story permeate all aspects of the game and despite being somewhat baffling and ultimately unnecessary, long time fans and enthusiastic newcomers will enjoy the enormous novel style story mode, if only for the hugely entertaining swearing that liberally litters the dialogue. The narrative ties everything together with its visual style, and makes all aspects of the game feel like a cohesive whole. 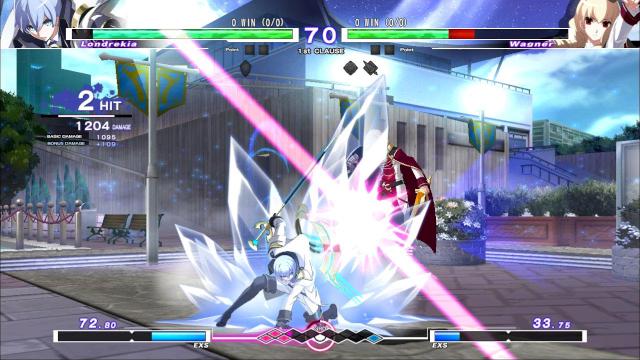 (cl-r), like Dragon Ball Fighterz and Persona 4 Arena, is easy to pick up and play, but provides huge amount of depth to anybody prepared to put the hours in. The button layout and combo system allow moves to be strung together easily and forgivingly for beginners, and the seemingly ubiquitous one button combo system returns to allow even first time players to make their character do some really cool looking stuff pretty quickly. These combos however, whilst pretty, deal only modest damage, meaning to optimise your opportunities you’re going to have to do your chores and learn the more complex combos and techniques to carry on winning at higher levels of play. The unique GRD system, which allows players to fill up a shared meter by attacking, defending, doing combos and special moves etc, allows players to turn the tide of battles without the need for an X-Factor style comeback mechanic and is a nice way of giving players hope without totally unbalancing the gameplay.

For people playing offline, there is plenty to do, including the previously mentioned novel-style story mode. The tutorial mode is a surprise must play, not only to effectively learn the mechanics, moves and combos of the game, but to get to know the characters themselves with their different personalities, styles and swearing tendencies. The usual array of other modes (score attack, time attack, survival, missions) are here and play pretty much as you’d expect them to. Versus mode is great, especially with a buddy of a similar level, although the game does a good job of levelling the playing field somewhat, without totally dumbing down the gameplay. Online, there is the usual player and ranked match options, and despite some reports to the contrary, all the matches I played online ran smoothly without having to wait significant time to get into them.

This absolutely feels like Under Night’s long-deserved time in the sun, and this version is a fitting celebration of this. It looks and sounds as good as ever, and the expanded but relatively modestly sized roster is varied and a joy to get to know. It plays beautifully and has plenty of features and charisma that makes it unique and distinguishable from it many peers in the genre. How long this honeymoon lasts remains to be seen, with the new Guilty Gear Strive around the corner and Granblue Fantasy Versus starting to make serious waves, but with another appearance at 2020’s Evo championships, it should be a while before the moon goes down on Under Night just yet.