Can Androids Pray: Blue is a short, narrative game where you play one person in a conversation between two downed mechs. Not realising this going in, I was waiting for the action. It doesn’t appear, and before you know it, it’s over.

It’s a hard sell. The ‘game’ lasts for about 25 minutes, and to reveal too much would be a spoiler. It’s an experience as much as it is a game you play – you have dialogue options to select which alter the direction of the conversation. My recommendation is to take yourself away somewhere quiet before sitting to enjoy it.

The two pilots begin with the despair of the situation. It’s all over. What follows is a conversation about life, the bleakness of it and their situation, and God. Does God love androids? It’s accompanied by some sparse yet striking visuals and a beautiful yet harrowing soundtrack. 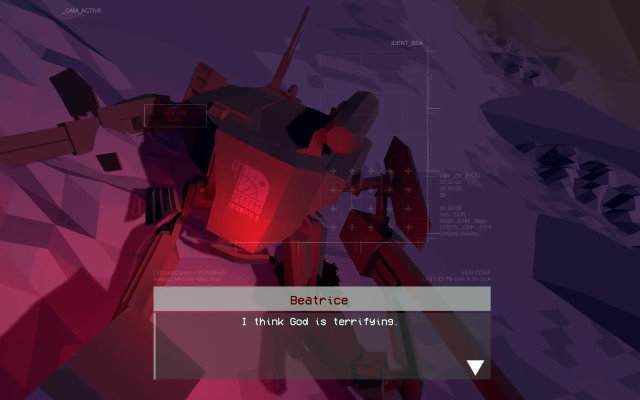 With multiple endings, there is some worth in replaying the story. Can Androids Pray: Blue is an interesting but short experience, and this is reflected in the price tag.