Ever wanted to cook a steak in VR, or feed a horse, or chop a skeleton’s arm off? Well now you can, and while Shadow Legend on the PSVR isn’t quite the RPG I thought it might be, it’s certainly a great adventure title with some awesome weapons, great exploring and wonderful casual experimenting to enjoy. It’s not as big as Skyrim so don’t go in expecting it to last more than a few hours, but you can go in expecting to have a lot of fun.

Once you’ve followed the tutorial, you’re left in a small house with a friendly NPC, a few things to do, and a veritable playground to explore. You can try your hand at making iron bars, you can sharpen your sword or straighten out a wonky one, or you can go climbing up into the rafters to look for some hidden stuff. Once you’re outside, you’ll open your eyes to a sizeable number of sandbox moments; you can play fetch with a dog, give a nearby horse some carrots, try your hand at archery and all sorts of other cool stuff. You have a book that suggests some things to do, but I had more fun ignoring that and finding things for myself, just by wandering round and seeing what I could interact with.

All of this is pretty superficial, and yet it’s far from a waste of time. Instead of a simple “go here, do that” style game you’ve got this fully fleshed out town for you to explore and enjoy. The beauty of games like this is that you can carry out a load of pointless tasks and waste an hour just seeing what else is around for you to try out. And it leads you so nicely into some of the puzzles as well, and whether you’re looking for a way to open a door, or hunting out rune stones or gems, these little diversions train you into knowing what to look for, and teach you how to interact with your environment. It’s a very intelligently put together package. 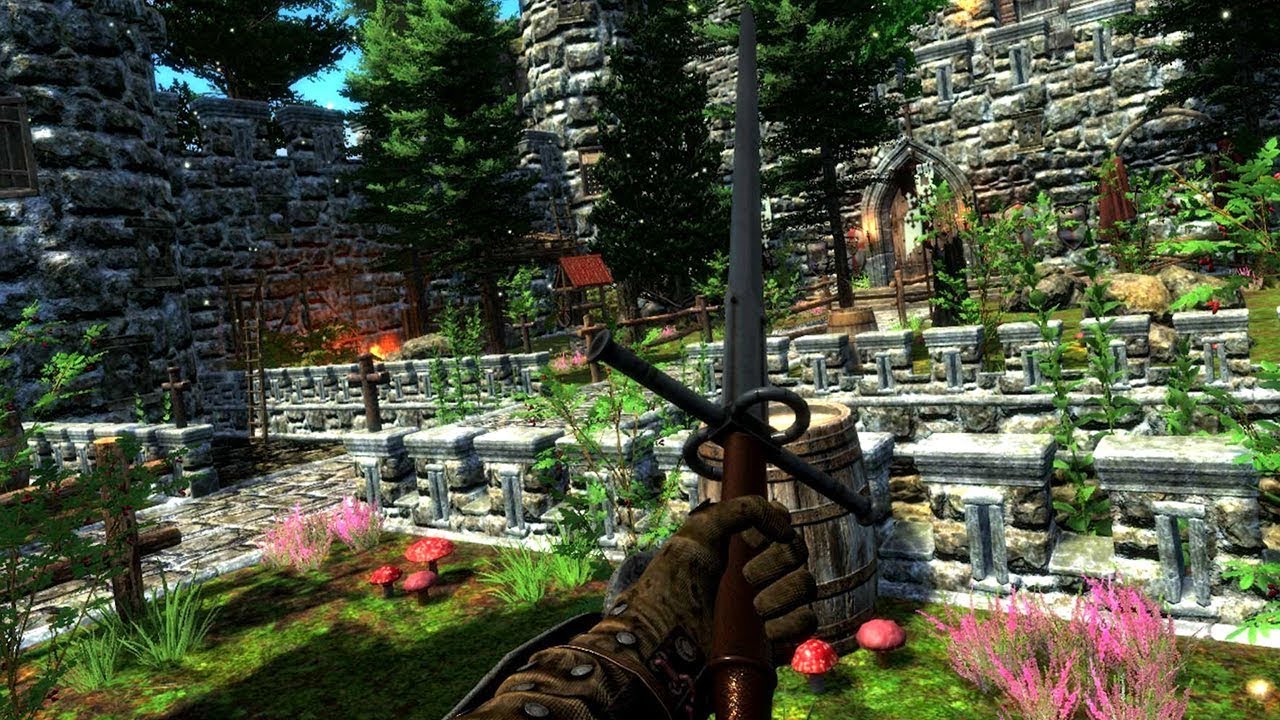 But what’s the point in the flaming swords and badass bows if you’re not going to have to kick some ass from time to time? With the bulk of Shadow Legend based in the exploring, combat isn’t all that common, but it’s such good fun when a bad guy finds you. A mechanic of blocking and attacking means you can just go in all guns blazing, wiggle the Move controller about a bit and hope to be left standing. You need to parry blows to open up opportunities to strike, then swing to attack. So far, so normal, but Shadow Legend wants to feel some weight in your attacks, so the bigger yours swing, and the harder your attack, the more damage you do. You can flap your wrist around like a nutter if you want, but you’ll barely do any damage and will more than likely get heavily damaged in the process. This way, you get the occasional dotted line letting you know a limb or head removal is on the card – landing those is extremely satisfying, and in true Monty Python style, even bad guys with no arms try to attack you be kicking you. Later enemies attack from a distance, which is tough but does let you knock their projectiles out of the air, which is one of the coolest things you can do in VR.

There’s a serviceable story running alongside this as well, and while it’s not the strong point of the game it does a good job of tying all of the fun together into a proper game, as opposed to a series of individual cool moments. I think you can tell a small team developed this, and that’s no criticism of the end result, but with a bigger budget and larger development team available I can imagine them taking the idea of Shadow Legend, bulking it up into a larger story with a wider reaching map, and turn it into something absolutely spectacular.

For now, we can enjoy this for what it is: a very fun, engaging experience with some excellent unique moments to be had. It could be longer, and could have a stronger story, but you should still get this if you have a PSVR headset. It’s worth every penny.