If you’ve ever played The Banner Saga, you will be familiar with Ash of Gods: Redemption. It’s so similar in fact, that it may well be a sequel made by the same developers. The art style, gameplay, score – all scarily similar. As in lawsuit scary. Still, the benefit of imitating a good game means that the result is you have a good game.

Like Banner Saga, there is a cell-shaded art-style and a historic spiritualistic theme. An event, The Reaping has set off a set chain of reactions in a magical world where the Reapers appear at certain points and… reap stuff. There’s a lot of confusion across the characters as you begin, with the opening scene showing how your character compromises himself and must deal with those actions.

Let’s assume you haven’t played the Banner Saga then, and I’ll explain the game. Great artwork and animation are supported by turn-based combat along an isometrical grid, where you have a combination of troops with varying abilities and movement ranges (and attack ranges). Characters have a health and an armour amount, each of which can be targeted and has an impact on the overall strategy of how and who you engage with.

So far so good. Only here comes a key difference from the Banner Saga. The combat is an absolute cluster-mess. In my first battle, I got stuck, as I could not even figure out the controls and difference between previewing my range and who could do what. Often once I’d made my move, the enemy would do something unexpected and illogical and obliterate half my army.

There’s also a card game element included. This excited me as I love card games. However, whilst you have cards which can buff your units or debut enemies, the enemy also has a card deck and it always seems to have way better cards than you do. Part of a strategy game is planning and anticipating what is coming, what to do and how to counter it. With an unseen random element here, it becomes very difficult to do this and often feels unfair and unjust. 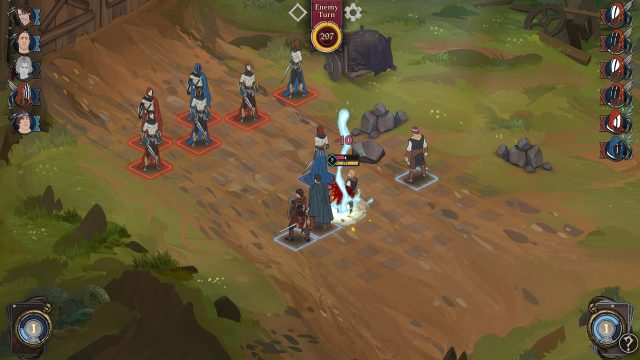 Whilst I love card game elements, I am starting to really hate reading in games. If I wanted to read, I’d read a book. That said, it’s not always possible to get voice actors for everything, especially in-game where characters have a lot to say and not an especially large budget. So in that case, I really want the writing to be good enough to keep me interested to read. This does not. It feels like a lot of the characters are written by multiple people in isolation as the tone skips between jovial to desperate and downbeat, then back, skitting through major life events and deaths of friends to cracking jokes. I felt like I’d accidentally kept skipping large parts of dialogue.

A permadeath system definitely adds some weight to proceedings, but it feels more like a constant punishment of the games’ systems than your own mistakes. Another mechanic – the Strix system – adds a way of boosting your characters to help them survive and heal outside of battle. Sadly, this is another element to an already confusing mish-mash of styles which doesn’t land. Basic resource management on top of an already punishing combat system and card mechanic is a bit too much.

It felt like a slog. Confession: I didn’t finish it. I may well try to, but honestly, it’s hard work. Games which feel challenging and downbeat need to offers glimmer of hope, or fairness in the struggle. So far, Ash of Gods: Redemption does neither.