It’s basically FTL isn’t it? It seems releases lately are imitating classics to the point of past flattery, but unlike my recent review of Ash of Gods (which was very closely following The Banner Saga), Convoy manages to both capture a familiar feel to FTL whilst adding its own spin and identity to a similar genre.

In a Mad Max style world, you need to find parts to repair your ship. You do this by piloting the titular convoy in a top-down view across a barren wasteland. Driving the icons across what is a hexagonal map reveals events to which you must make decisions about. You discover a band of strange looking fellows. Do you investigate to see if they need help? Maybe they do, you help them and you’re awarded some salvage. Maybe not, it’s a ruse, and they want to fight you. This takes you to the main element of Convoy.

The combat is where it all counts. Top down, but this time with a pixelated main vehicle which you must protect at all costs, by controlling a number of small vehicles. You do this by positioning them in various squares surrounding the vehicle to best manage the onslaught of enemies. Get within range and you can attack – the strategy comes from deciding what vehicle is best placed to have what weaponry and skills, and how you engage your opponents. 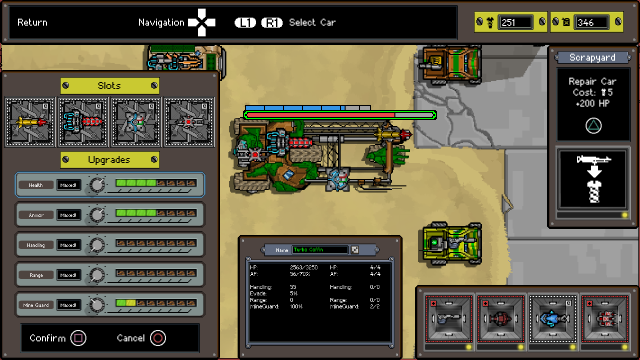 This is the core gameplay loop – collect stuff while venturing through the world to fend off the bad guys and get more stuff, until eventually the ship is built and you win. The high speed car chase means that how quickly you can manoeuvre your vehicles is important to offer yourself the best chance of protection. The weapon and abilities are also key as previously mentioned, which adds weight to the decisions you make by the text events you find in the world.

Convoy utilises the now popular pixelated style. Honestly, I found this a little too much, especially when flicking between menus and the shop, trying to upgrade my vehicles. It’s a bit of an assault on the eyes but you get used to it, it’s manageable. I wish it were a bit cleaner, a bit more sparse like the wasteland it’s trying to appropriate.

Over time, you’ll unlock different and better base vehicles to begin your campaign with. Taking inspiration from FTL, once you’re finished, it’s time to start over so better performances will lead you towards better starting resources. Despite the difficulty settings, it doesn’t necessarily make life easier however.

On the easiest setting, I found myself taking a lot of punishment most of the time. Once I figured out that the ‘ram’ function should be used more frequently, despite some damage to yourself, things got a bit easier.  The penalty for getting it all wrong is steep though, despite safe houses being found across the world, there is no saving here. Die, and you’re dead. It’s start all over again time. Par for the course for the rogue likes, but minor decisions being made slightly wrongly is punishing.

Convoy captures the Mad Max atmosphere well. It’s top down, pixel style suits the type of game it is, even if it is a little overwhelming for my tastes. There’s a lot of tactical play here, and a lot of reward for getting things right and seeing it come together. As inspirational as FTL has been, there hasn’t really been much that’s captured it’s brilliance. Until now.