In Other Waters is not a game I should enjoy. It’s slow-paced, there’s a lot of reading – it’s basically a text adventure – and yet I found myself fascinated with it.

Dr Vas is searching these deep waters, looking for somebody. You’re helping, an AI, piloting the underwater suit. Your control panel is a beautiful hub or dials and switches, which becomes your ‘view’ into the game. ‘Controls’ in this game are more about selecting, scanning, and positioning your craft through this hub. One button scans, a control panels shows radar like significant objects and places. More scanning, selections to move.

It’s all quite engrossing. Descriptions of creatures, discoveries, underwater atmospheres. The world is fleshed out through evocative language that makes it easy to imagine. Your window into the world helps, vibrant yet subtle colours (starting with a turquoise and yellow combination) give life to all sorts of dials and graphical information.

Is that all there is? Scan, move, scan again. Well, sort of yes. But it’s about exploring the world and enjoying it as it becomes more and more complete before your eyes, fleshed out like a good novel. It’s an atmospheric story adventure as much as anything, an exploration of how people life and coexist with things that aren’t human. Samples are collected and stored, ready for your analysis at any point as your build this image in your mind of what you’re collecting, only for the game eventually (if you collect enough samples) to show an impression of what you’re capturing. 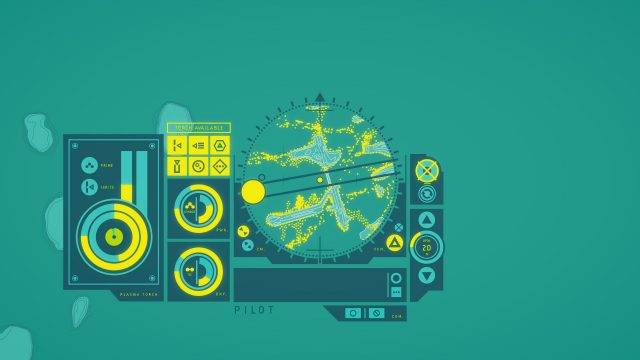 It feels to me like it’s a game about the natural world, or rather, what exists in the world if we’d just give it chance to explore. It’s especially prominent at the moment as nature seems to be taking a breath and exploring in a way we don’t let it when we’re in our ‘normal’ busy lives.

I can’t quite get my head away from how it looks. I’ve mentioned this already but it really is worth repeating – it’s simply stunning and if you can, play it on a big screen (it is such a shame to play it on the small Switch screen in handheld mode). More than a few times it captured the attention of my partner as all sorts of dials and gadgets are whirring in the luminescent hue as she reads what is going on. The soundtrack deserves special mention here too, as a lo-fi relaxing electronic score, which develops along with the game as you discover more about the world and even reacts to your selections, playing beats between your button presses.

For all its brilliance, I struggled slightly with the intuitiveness of the controls. The various components of the heads-up-display are managed by all the various buttons on the Switch. Things like a positive dialogue choice are left on the d-pad, with a negative choice being the right button. There were points where seemingly everything I pressed wouldn’t do anything, and I’d be turning the game off in a rage of frustration only to come back to it later where everything seemed to work ok. Let’s put this down to user error, but with everything so neatly and nicely blended into the display, at points this became a barrier for me so there’s an accessibility issue to raise.

I’ve not played many games quite like In Other Waters. It’s different and tries something new, and looks and sounds amazing while doing it. It’s not the longest adventure, probably 6-8 hours maybe, but an enjoyable time while it lasts – and the slower you take it, the better.