The premise for Deliver Us the Moon is one which, not long ago, you would have rolled your eyes at and seen it as just another far fetched fantasy plot. And yet with the global focus starting to turn to climate change and our traditional energy sources running low (well ok, maybe that’s not what the world is mainly worried about right now, but even so…) the idea of a world drained of power production and drifting into a  state of emergency doesn’t actually seem entirely ridiculous. As such this story of a not-too-distant future where a worldwide organisation draws up plans to mine power-producing Helium-3 from the moon, and set up a power-transporting system to beam the energy back to Earth, starts to nudge into the realm of “unlikely, but make a note, that might come in handy”.

You take over the story a few years after the transmission facilities on the moon have gone dark. No power has been sent for some time, and all communications are lost; as such Earth isn’t a very nice place to be. The whole planet is a desert, dust storms are getting increasingly violent, and the only hope of turning things round is you. By activating a series of rocket systems, racing to the rocket before it launches and then sorting out the correct launch procedure, you’re one your way to a one-person mission to the moon. It’s your job to get the power back on, figure out what’s happened and save the world from crumbling into nothing.

The good news is, that’s not as daunting as it sounds. This is largely a puzzle solving game, mixed with a bit of pathfinding and stealth for good measure, and all of the puzzles are entirely solvable just by using a bit of common sense. You might need to get through a damaged section of wall, which at first is confusing until you spot a large trolley on wheels nearby. And that corridor leading to the wall, it’s a bit downhill isn’t it? Well, there’s one way to find out… And so this goes on. Some sections are more tricky than others, needing you to play around with powering various parts of your environment at the right time to access new places. You’ll need to find security codes to unlock secure doors. You’ll meet a flying eyeball-like robot that you can take control of and send into areas you can’t go, such as through half opened doors or down air ducts. At first your robot companion seems like a helpful tool to get you through to the next area, but before long the loneliness of being on the moon by yourself starts to take hold, despite this being just a game. The expanse of nothing outside the stations’ windows, the huge, mostly empty locations you find yourself in, the way things have been deserted seemingly in a rush with most systems not working fully… this robot starts to feel like valuable company. It’s such a strange emotion; neither you nor the robot ever speak, but it feels good knowing there’s something on your side, looking out for you and willing to help out. 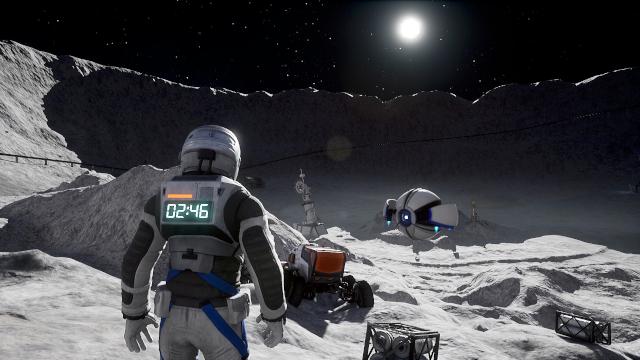 This feeling of emptiness is one of the crowning glories of Deliver Us the Moon. Playing this with headphones on in a dimly lit room, you really feel the weight of trying to get things working, to try and save Earth, and how you’re the only person up there able to do anything about it. If you screw up and electrocute yourself, the Earth is screwed. If you run out of oxygen while floating around in space, you’ve failed everyone. And of course that’s not the case, it’s a game after all, but it’s easy to get engrossed and totally immersed in what’s going on. It’s not far removed from a game like Gone Home; there’s the same kind of exploring, of trying to work out just what happened, of quiet, empty surroundings, although now you’re on the moon, and space wants to kill you by not letting you have oxygen when you’re outside.

I’ll be honest, I loved the idea behind Deliver Us the Moon, but had a level of scepticism as to whether it would translate into something fun. I was worried about the pace of the game, about whether the puzzles would be realistic things to solve, or utterly crazy like one of the tougher levels in Portal. But I needn’t have worried. True, there are one or two small issues that I found a bit jarring – it’s hard to float around accurately in first person mode, which makes some areas tough to survive, and the autosave pauses the game for a second or two when entering a new area which can give the immersion a kick – but on the whole I had a great time playing Deliver Us the Moon. I got totally hooked by the story, the setting and the pace, which despite my worries feels pretty much spot on. I didn’t touch another game until I’d finished it, which is quite unusual for me. it’s only 8 or 9 hours long, depending on how much you explore, but to go through a game without deviating into other things is uncommon.

This is an easy game to recommend to pretty much anyone. If you’re sitting on the fence, get off it and strap on that astronauts kit. You’re going to need it.