I was bowled over by the simplicity of Fledgling Heroes when it started. Then I was win over by its charm, and visual design, and then by its depth of options and courses. Finally, I wanted to smash my Switch into pieces.

Fledgling Heroes is a more gamified take on the mobile hit Flappy Bird. Itself a game launching on mobile platforms along with Switch, the core concept is simple. You’re always moving forward, tap a button to flap and maintain height. Simple. Avoid things.

That was the hook of Flappy Bird but Fledgling Heroes adds some wrinkles to make it more interesting. There are a number of baddies to avoid – lizard pirates, mean fish (there’s a weird plot about liberating rabbits from a pirate island) – and things to dodge which end your run. Collectibles exist by way of coins, and golden feathers as well as the aforementioned rabbits to rescue. The feathers are important as certain numbers of these are needed to unlock future levels. 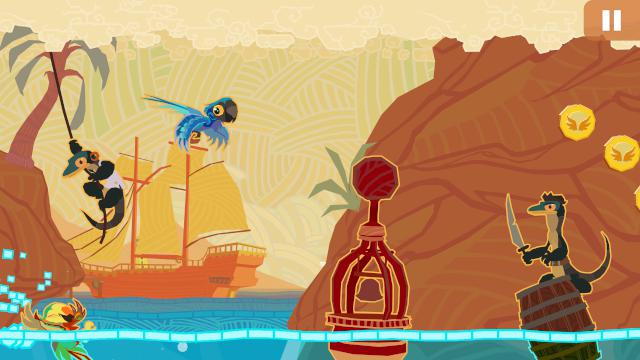 A neat twist is that you can hit the floor and bobble your parrot along it, but the ceiling will end you. Checkpoints mean that it’s not too punishing if you make a mistake, but the punishment comes by way of frustration anyway. Later in the second world of levels you come across a series of jellyfish as you pay the second protagonist – a penguin. The penguin operates underwater which opens up a new variety of level design and baddies, but the jellyfish can go straight to hell. At this point I started to question who the game is for. It’s much too hard for kids, but probably too frustrating (or lacking quite enough depth) for adults.

The parrot and penguin are joined by other mates through the game which mix and change the dynamics slightly. Brilliantly you can completely change the colour palette of each of the birds, adding more vibrancy to the already colourful and pretty nice looking world, as though it’s made out of a series of paper cut outs (but never looks quite like that in a real world scenario as a Paper Mario does).

My surprise peaked when I saw a level creator. Not only can you build your own levels, but you can share them online or download other levels that people have uploaded. This is a great feature and adds massive longevity to the game.

It’s an enjoyable game. As a short blast it’s great, but the later levels get really annoying, so fun gives way to a test of your patience. Still, it’s fun while it lasts.