There’s a lot of competition in the gaming headset world right now. Whether you’re looking to spend a fortune, or next to nothing, you’ll find a range of companies vying for your custom, and with so many buzzwords flying around it’s sometimes hard to know what to look for – or indeed, what to avoid. With the G432 gaming headset, Logitech has pitched this at the lower end of the price war letting you pick it up for around the £70 mark. So is it worth saving a few quid by picking this up, or would you be better served looking at one of the mid-range HyperX sets on offer? Well, let’s weight things up.

First off, and what I often see as the most important element of a headset, is the comfort. You could have the most amazing sounding headset on the market, but if my ears are sweating after 4 minutes, I’m not putting that thing back on. The G432 does a decent job of being comfortable for a reasonable amount of time, but I’m not sure I could rely on this for a several-hour gaming marathon. They begin to feel quite tight after a while, and while they didn’t make my head feel overly hot it felt good to get them off after playing, a bit like a pair of work shoes that feel fine for a bit, then just start to get a little snug by lunchtime. It’s certainly not the least comfortable headset I’ve ever tried, that’s for sure, and for a lower priced bit of kit it’s not too bad at all.

But what of sound quality? Well for listening the G432 sounds really good, and while the 7.1 surround sound is very dependent on what you’re listening to it definitely gives a more spacious feel to your audio, as if you were sat in a large room with a speaker setup as opposed to just listening to stereo headphones, although there were occasional moments when it muddied the sound a bit and almost made it harder to work out where the sound was coming from. The PC software is really nice in this respect though, letting you set up the sound however you want to and try out the various surround options, and if you’ve got other Logitech gear will let you keep everything in one place and access your mouse, keyboard, headsets and other Logitech gear all in one bit of software. In terms of the sound though, there’s a good level of bass here which doesn’t get in the way of the more delicate top end sounds, and voices from other players come through well and gives a nice clarity to what people are saying. For what you’re paying, your ears will get a nice surprise from this. 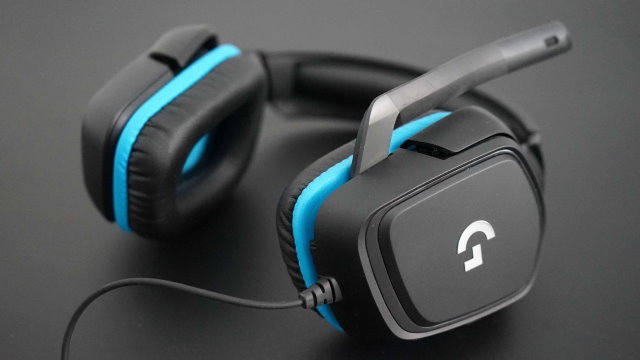 Which sadly can’t be said for people hearing you talking to them. I spoke to a few people with this headset, and recorded a few clips of me talking, and the quality was pretty low. The mic itself has the awesome feature of switching itself on when you lower it down in front of you, and muting itself when you raise it back up – as a feature I haven’t seen this since reviewing a fantastic Sennheiser headset a few years ago, and it’s great to see that finding its way back into a headset again. But the difference between this mic and those found on a higher end headset, or the more expensive but spectacularly good standalone Antlion ModMic , it’s pretty stark. If communicating is important, or you’re looking for a headset to double up as a video conferencing microphone, this really isn’t the right bit of kit for you.

So far, so much-expected from a sub-£100 headset. And this theme continues with the material quality on the G432, with some unfortunate plastic-rubbing in the headset’s cups whenever you move your head a small amount. I found this to be a bit off-putting at times, and while hammering round Monza on Project Cars 2 I found myself trying to keep my head as still as possible to as to avoid the creaking coming from my right ear every time I moved. It’s a shame, because despite the cheaper materials used this doesn’t feel like a low-end headset. The cups spin to allow you to take them off and rest them flat against your body, the headset feels like it’ll last well, and while the extendable headband doesn’t clonk into place very convincingly it’s extremely easy to get the cups sitting perfectly over your ears first time. So to have this creaking while using them is quite a shame.

So where does the G432 sit? Well, for a few quid more you can get the Logitech Pro X, or the HyperX Cloud Alpha. Both cost more money, and while I can only speak for the HyperX headset (having not tried the Pro X just yet) I’d suggest that paying the extra would be worthwhile to get the improved build quality and better microphone. But if your budget is tight, and this is at the top of your price bracket, you could still do a lot worse than the G432. You can feel the cut corners, but a 7.1 headset for this price isn’t to be sniffed at, and if you’re not worried about the sub-par mic and lower material quality, this could be your headset.