Another first-person story-adventure game, Moons of Madness tells the story of you as a technician on a research station on Mars. It begins, terrifyingly, on an abandoned station, haunted by strange activity. You quickly discover this to be a nightmare… or was it?

As you wake, you’re tasked with exploring the station again, this time in a more calmer climate. However, things aren’t as they seem as your space-buddies are slowly going a bit mad. This exciting prospect never really materialises into anything major, and I went from what was looking like an Event Horizon game, to a basic ‘do space jobs’ and ‘run away from monsters’ game.

Predicated mainly on tension and jump-scares, Moons of Madness isn’t really sure what it’s supposed to be. A light space-sim to a degree, a horror adventure, definitely not a first-person-shooter, it’s more akin to the Outlast type games but not quite capturing that same degree of terror. There’s one bit where you have to run away from the monsters, but the frame rate takes such a plummet you can’t really be too scared (unless it’s from your own risk of having a seizure). 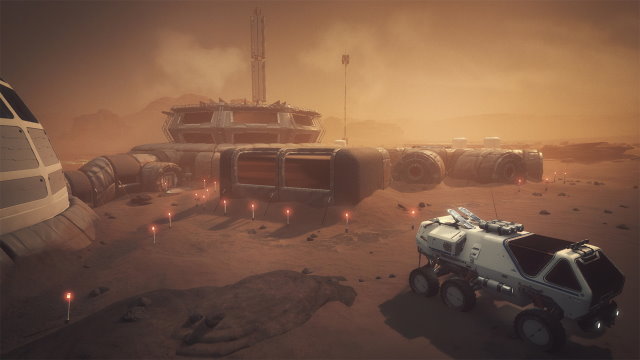 When it’s slow and fairly static, it looks pretty nice actually. The environment and particularly the subtle sound effects are cool, with some scenes which wouldn’t look out of place in The Martian. Sadly there’s no Matt Damon to be found here, but the voice acting isn’t too bad.

I found myself quite enjoying the environment. It however highlighted the lack of content surrounding it that is really needed to flesh it out. Some of the bits that you are doing end up feeling a bit like filler rather than legitimate content. With the skeleton complete, it feels like a missed opportunity that it couldn’t be fleshed out with more compelling content.

It’s not the longest of games but it will feel it due to some questionable pacing. After the first hour, it’s really rather tough and I found myself trying to multi-task whilst playing the game – never a great sign. As a spacey-experience game, it’s reasonable but ultimately hard work and tough to recommend.