One of the great things about being a dad to a young boy is being able to play with all those awesome toys that I loved when I was younger, with no fear of anyone thinking I was weird. Who cares that I actually tweaked his Brio train tracks after he’d gone to bed, or set up his Lego cities in a way that feels more realistic while he’s off at his grandparent’s house? The fact is I could put my train tracks together, challenge myself to make the most amazing and fancy layouts using the bits available, and it was all in the name of being a dad. Honest.

The trouble there is that he’s grown a bit now, and his interest in Brio trains has pretty much tailed off. So I need a new way to mess around with trains and trainlines, so how fortunate that Railway Empire rocked up when it did and gave me a great excuse for building up my own rail network and choosing how to lay out the tracks, which trains to run and how to link up key services with various towns. And in the most part it does a great job, even on the slightly smaller screen of the Switch Lite, giving a really enjoyable strategy game without enough rail-specific mechanics to serve most train fans for quite some time.

The game here follows the railway industry from the 19th and 20th centuries, with steam power very much the focus. You’ll probably want to start with the tutorial, which does an excellent job of bringing in each mechanic bit by bit and making sure you’ve done each step correctly before moving on. You’ll look at building stations in towns and farms, how to lay down tracks as well as buying and implementing trains. It goes into some more complex ideas too such as parallel tracks and switches to stop trains meeting head on, and while the pace here is excellent it also highlights some moments when the control scheme is very poorly communicated. Laying down a station was a source of frustration for quite some time; you’d expect the A button to do the selecting, but no. The A button plays the tutorial video. Pressing X actually semi-backs out of the not-really-a-menu that you’re in and lets you place the station, but there’s nothing that suggests you need to do that. I just found it by pressing everything out of annoyance. The good news is that this isn’t always the case, so good luck figuring out when to press X first and when not to. The on-screen controls give you most clues, but not this one. Yay. 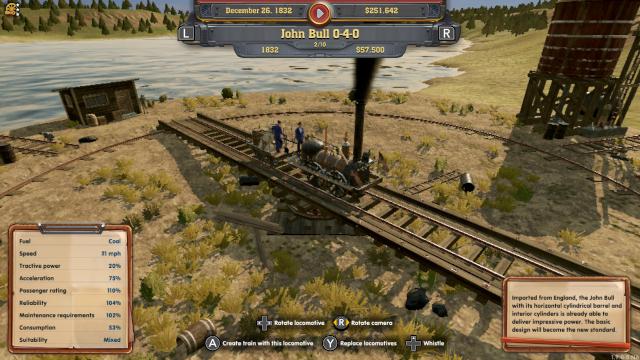 But get your head round that, and the frustrations have pretty much all been considered already. The text is small but very readable even on the Lite, and the introductions and instructions provided at the relevant times are all useful and interesting, letting you know what’s going on and why it’s happening. But interface aside, and once the tutorial is over, what’s there to do? Well, quite a bit.

If you want to just leap in and start knocking up your own network without any boundaries or objectives, you can jump into the sandbox mode. This gives you pretty much everything straight out of the box giving you the freedom to just play around and see what you can come up with without the worry of anything getting in your way. I spent ages in the sandbox once I’d learnt the main controls, and being able to decide how the trains work (needing their own lines, or passing through each other) also frees up a bit of brain power to focus on everything else you need to learn to make a success of the missions in the other game modes.

Elsewhere, you’ve got even more to worry about. Move away from the sandbox and you’ve got a limited budget to worry about, as well as time constraints to get thing done and competitors trying to ruin things for you by setting up their own routes and outbidding you for new trains and suchlike. There’s a sizeable challenge through Railway Empire, and it’ll take some exceptional planning and a small doe of luck to ace each scenario and claim to be a train master. There are also loads of locations to try out, including the Great Lakes and Andes DLCs that come bundled in with the Switch version. The in-game messages are already pushing new DLC despite the game only just coming out, but if you want to head to Europe for some French, German or British train planning then at least you’ll have the option to pay out a few more quid for those.

There’s a lot of hours worth a game time in Railway Empire, that’s for sure. Between various eras of rail travel, loads of locations, a range of challenging scenarios to try out and an almost unlimited number of ways to try and attempt each one, you’ll be hard pushed to run out of things to do here. If you’ve ever dreamed of setting up your own rail network, or just want a deep, strategic game to carry round with you on your Switch, this could well be one worth looking for. it’s a shame the controls are badly signposted and hard to figure out, because apart from that this is a pretty solid package. Impressive indeed.