Red Wings: Ages of the Sky is set in World War 1 at the time of the infamous Red Baron. Told in a number of levels split across both the Alliance and the Entente (basically Nazis and Allies) as two separate campaigns fighting either with or vs. the Red Baron himself.

The story is told via still shots, which gives it a comic style story-telling feel. In-game graphics are cell-shaded so lean into this comic feel, but also helps it looking fresh and stylish. The story is pretty much good vs. evil – it’s hard to call out many more intricacies than that but this game is all about the in-air combat. Does it deliver?

Pretty much. Planes are in third-person view and let you fly about freely and lightly. It has a Crimson Skies cross Starfox feel to is. You set your thrusters and steer as needed, with some cool-down powers on hand to give you more flexibility. One does a U-turn, one does a barrel roll. These are useful but the cooldown means they can’t be spammed, so has a tactical element to it.

The other two face buttons give you additional powers. One lets wing-men come in to attack your target. The other fires a one-shot kill at a damaged opponent, triggering an animation where a pilot reaches out of the cockpit with his pistol to shoot the enemy. This is a cool ‘finish him’ move but sadly it takes a long time to power up and then is only useful on those ‘nearly dead’ enemies anyway, at which point it’s easier just to blast them with your cannon. I felt the same with the wing-men, cool feature but ultimate a bit pointless. 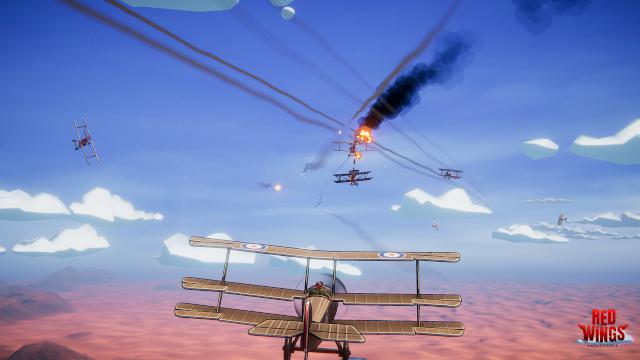 As an arcade game, the gameplay is pretty simple with what you need to do also. Missions are simply ‘kill everything’ or ‘defend everything’ affairs with an occasional time-limited bombing run thrown in. You have no missiles so rely on your unlimited-ammo cannon although this does overheat so has to be managed. There’s an upgrade tree which allows your to better increase your plane stats but this requires a 3-star completion on each level which ultimately requires you sprint to complete them, turning this into a rather hurried experience.

There is a selection of other planes on hand to unlock which varying stats and colour schemes, but sadly no multiplayer. There is a survival mode but unfortunately, this is just too similar to the main campaign – survive waves of enemies and kill them all.

It all looks pretty though and is fun to play. Sure, it’s repetitive but as a drop-in and shoot-some-stuff affair, it ticks the box nicely. It ultimately feels more like a missed opportunity for me, for a game that with a few additional bells and whistles could really scratch an itch in today’s market, but ultimately I got bored rather quickly and felt I’d seen it all in a short space of time.